The Lincoln Lawyer star Matthew McConaughey is as cool as they come. Walking into our room at the Four Seasons Beverly Hills dressed in all black, it is clear why this man is considered a heartthrob to so many.

Matthew McConaughey is Mick Haller in The Lincoln Lawyer, an attorney on a mission. Haller is always on the move, a mover and shaker who operates his law firm out of the back of his black Lincoln. 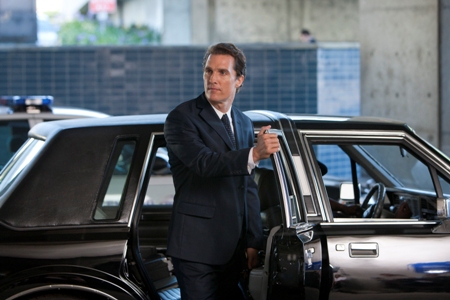 McConaughey himself is quite the man in motion as well, a Hollywood legend-in-the-making who is known for being active, but also one who isn’t content sitting around waiting for the next great part. McConaughey stars in The Lincoln Lawyer opposite Ryan Phillippe, Trace Adkins, Marisa Tomei and William H. Macy in the courtroom thriller based on the bestseller by Michael Connelly.

After getting his big break in Dazed and Confused, McConaughey has not looked back as he has become one of Hollywood’s most bankable stars. McConaughey tells us in our interview that law school was initially his path of choice and gives us the inside scoop as to how his mind changed to pursue a life in show business.

McConaughey has been a versatile actor since choosing the life of acting. From that pop culture legend in Dazed and Confused, he has starred equally in dramas, comedies and period pieces. With U-571, Ghosts of Girlfriends Past, Amistad, Lone Star, A Time to Kill, We Are Marshall, Failure to Launch and The Wedding Planner, McConaughey always delivers. 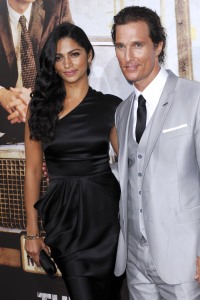 SheKnows: What is it that you enjoy so much about portraying lawyers? Your role in A Time to Kill is unforgettable for one…

Matthew McConaughey: I thought that’s what I wanted to do with my life since I was 14. When I was in school, that’s where I thought I was heading — law school at the University of Texas. I changed my mind my junior year when I looked up and saw two more years of school, then four years of law school, and realized, “You’ll be 28 by the time you get out and you can actually implement an imprint in society.” I didn’t like that idea. I didn’t want to miss my twenties. I wanted to get experience and try something out.

SheKnows: What was the most compelling thing about the law?

Matthew McConaughey: The debate. Love debate — from both sides. When I went from that to being 19, 20, 21…I really started to fall on the side of the defense and really felt like that I was purely built for and felt 100 percent clear with being able to defend someone if I knew they were innocent. That was a battle I could not lose. There’s certain things that you believe in and you go, “That’s one of those places I’ll find every bit of energy from the depths of my body and ancestry that I can fight that fight and win that fight.” That was idealistically why I was interested in defense. Now, glad I changed my path. I get to do that now, retire and do something else, go on to another story. This story, much more of a pragmatic character as far as knowing how the system works. That ideology that I had at 19, 20, this character doesn’t have that. He knows how the system works.

SheKnows: Do you think these defense attorneys care if the client is innocent?

Matthew McConaughey: The thing is most of these guys these defense attorneys are defending are guilty and they know that. It’s just to what degree, how much can you ameliorate the sentence, and bring it down. It’s much more of a game and the system is a game — who’s dealing who, let’s make a deal out here in the alley outside of court so we can go in and get this off our desk — than I ever thought it was. This guy plays the game very well and knows the system. He’s on the side of defending the people that can’t defend themselves, that underbelly of society. He knows the game and knows the system. His challenge is to make the system work for him, make the system work for him while not letting the system know they’re working for him [laughs].

Matthew McConaughey is The Lincoln Lawyer

SheKnows: Your character has a rhythm to him that carries The Lincoln Lawyer, was that in the script? How hard was that to find for you? 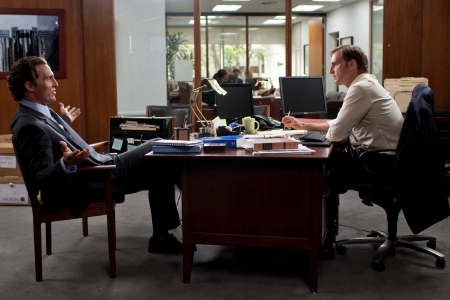 Matthew McConaughey: I personally love movement anyway. I love movement. This whole script had movement in its simplest form, the office, the mobile office. The Lincoln, you can hear it in the script, what great entrances and exits from scenes. Open up, the Lincoln pulls in, he gets out. It’s a great segue. It’s a vehicle literally for segues. That was something true about these guys who do what he does. They don’t stop. Everything moving, dance, got a few things going, put it on my desk, call me up, walk with me, they have a dexterity that is always on the move.

Matthew McConaughey: I prefer it. I’d rather work that way when we’re making films too. I can’t stand going back to my trailer to wait to then re-enter the next scene. Let’s show up on set that day and everyone be prepared and let’s crank and shoot film all day. Let’s rehearse it on film.

SheKnows: Haller has that soundtrack with him, is there a soundtrack for you, personally?

Matthew McConaughey: I got different soundtracks for sure. I got a whole bunch of different playlists [laughs]. That’s a fun thing, music, it’s a really great creative tool for me for different roles. The soundtrack for Mick Haller was much different than any other soundtrack I’ve had for any other character. That’s always fun to go through. Brad Furman, the director, had a really good musical sense of where he wanted to go with the film and I asked him early on, “One of the best things you can do for me is let me have musically what you got.” So he handed me 40 songs and 30 that I didn’t know. That helps with movement. That helps with pace. That helps with approach. 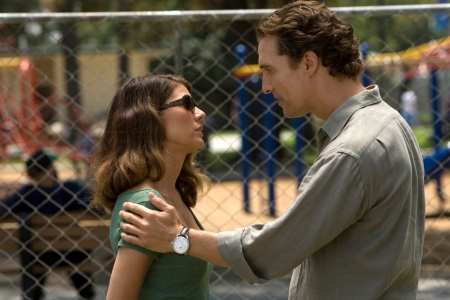 SheKnows: When it comes to that go-go attitude, how is that when you’re doing multiple takes?

Matthew McConaughey: [Pauses] We didn’t do many over and over. I think we average four or five. I’d rather do, I say it now because I just finished working with William Friedkin who always does a maximum of two [laughs], I like that. I like when there’s no time to warm up into it because if you didn’t get it by take two, too bad. You show up more on the first one, for sure. I don’t mind more takes because I have a really good amount of energy and don’t mind if we try something a little different. It’s nice to do it again, sometimes I catch myself acting in one spot. I fibbed. I enjoy keeping it rolling…

Going inside The Lincoln Lawyer

SheKnows: You and Ryan (Phillippe) didn’t rehearse. Was that on purpose?
Matthew McConaughey: I’ve done where we don’t rehearse and I’ve done films where we heavily rehearse. I like rehearsals. Just for this particular relationship my character Mick has with Roulet, my client, we’re both trying to play each other throughout the thing. I didn’t want to know, I didn’t even want to have an idea of what his hand was going to be. I sure as hell didn’t want to share it with him what my hand would be. Look, I got my guy down. You’ll have your guy down. Let’s meet when we’re in the scene. Let’s meet each other there and go on this two-month fun journey of getting to know each other through our characters.

SheKnows: Did you have the opportunity to meet any attorneys who are like your character in The Lincoln Lawyer? 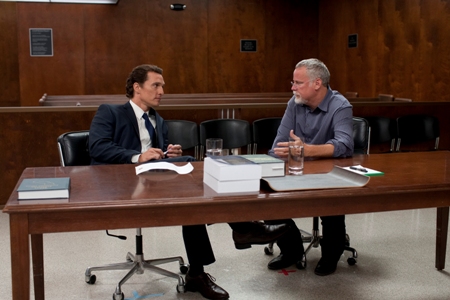 Matthew McConaughey: Yeah, I spent some time with a few. Couple in particular, I got a lot of information. I went in thinking I was going to get something really specific but it became more of watching them work. It was never anything specific, watching them work, watching the movement. It was almost like they were bookies. They’re wheeling and dealing, haggling back and forth. They love telling their story. They love talking. They’re born performers. They want to get up there and perform. They revel in that. Some of them had some high profile cases, and those high profile cases were on the wall [laughs], showing you yes, that was me. They weren’t heavy in the morality of the situation. It’s not that. It was much more they got a job to do. This is the job. My job is to get you not guilty or lessen your sentence. That’s my job.