Adorable furballs that kick butt! DreamWorks practically invented them. The animation studio gave SheKnows a peek at their 2011 slate with a preview of Kung Fu Panda 2 and Puss in Boots. Although both films will finally appear on screens in 3D, we saw selected work-in-progress scenes in 2D and were still very impressed. 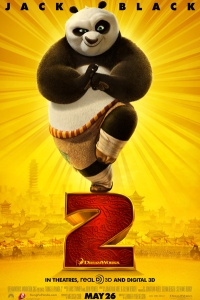 Launching the sneak peek were studio head Jeffrey Katzenberg, the Panda himself Jack Black, Puss’ alter ego Antonio Banderas and surprise guest director Guillermo Del Toro who has a producing-consulting deal with the studio. He will be working on the upcoming Rise of the Guardians as well as Puss in Boots.

In Kung Fu Panda 2, Po is the successful famous Dragon Warrior who, with the fab Furious Five by his side, protects the Valley of Peace until a new foe, a gorgeous but evil peacock voiced by the great Gary Oldman, threatens to destroy Kung Fu and conquer China with his secret weapon. Po’s personal journey to find his roots and birth parents is also prominent in the new tale.

After we viewed a particularly precarious scene about halfway through the new Panda, Jack Black rushed to the stage yelling, “Stop the film!”

The funnyman, in a colorful Hawaiian print shirt, then treated us to a rundown of “the five most important things about the rest of the movie that you didn’t see.” Part of the rundown included Black’s live Kung Fu demo. “I’ve been approached many times by guys who want to fight me. Then they can go home and tell their buddies, ‘Hey man, I kicked Kung Fu Panda’s ass.’ So, I’ll give a short demonstration.”

Black practically did the splits and was hilarious, yet looked competent in an odd way. “You don’t wanna mess with me.” The actor stressed that Po’s final battle with Oldman’s peacock Shen is “one for the ages.”

Shifting gears from panda to pussycat, we were treated to scenes from Puss in Boots. In this origin story, long before Puss meets green ogre Shrek, the booted feline enters a seaside town in search of plunder. At first the “iffy” denizens of a bar laugh at the tiny feline until he proves he is more than soft fur and big eyes. Learning of a goose that lays golden eggs and some magic beans worth stealing, Puss sets out to grab the beans from crime couple Jack and Jill, voiced hilariously by Billy Bob Thornton and Amy Sedaris. 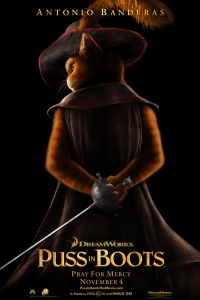 A rival, masked cat burglar pops in to steal the beans and the two have a dance-fight competition at a local cat club. Imagine loverboy Puss’ surprise when the agile thief turns out to be a catwoman — the sexy Kitty Soft Paws voiced by the lovely Salma Hayek.

Although we don’t see much of Humpty Dumpty, Puss’ longtime rival, voiced by funnyman Zach Galifianakis, their exchanges promise to be hilarious. Director Chris Miller assured us that, yes, we will see Puss’ heart-melting “big eyes” stance at least once. Yay! With the plethora of adult-aimed jokes accompanied by cute action, we’re sure Puss will please the entire family.

After our viewing, Antonio Banderas took the stage to thank DreamWorks for giving him the voice role of the feisty feline. “Once upon a time, about eight years ago, Jeffrey Katzenberg gave me one of the best gifts I ever received. It was a little cat (cue the onscreen image of “big eyes” Puss, accompanied by “awes” from the press). I’ve had so much fun with this cat over the years. In many ways, his story is similar to my story. He came into Hollywood and got into the movies as a supporting character and now look at him, a superstar!”

We learned that the busy Banderas records Puss dialogue in standard Spanish and Castilian as well as Italian. Antonio, on his way to DreamWorks to record more of the Puss voice, introduced Puss in Boots producer Del Toro who joked about his rotund shape and praised the “three free meals” at the studio.

Del Toro spoke of his fascination with animation and the studio’s cutting edge attitude. He is impressed every day with the detail in the new film when he sees “the beauty of the fur or whiskers or a back-lit ear.” We see a clip of the formidable Mr. Del Toro voicing a cameo role as a tough Comandante.

Guillermo Del Toro wrapped up by calling Puss in Boots “painterly and operatic visually.” He believes that animated films are “hypnotic in many ways” and thinks Puss will prove his point.

Bring on the feisty furballs! We can’t wait.