They may be separated but Courteney Cox still has “strong feelings” for David Arquette. 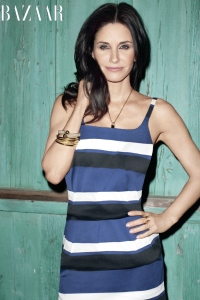 Am I the only one who really, truly hates to see Hollywood marriages break up? Well, hopefully today’s news means one more will actually work out.

Courteney Cox is currently separated from her husband David Arquette, who famously spilled his guts (and the details of their relationship) on the Howard Stern show.

That could have been the death knell for their marriage. But Cox recently spoke to Harper’s Bazaar for their April issue and admitted to still having “strong feelings” for her wayward husband.

They announced their trial separation after 11 years of marriage last October, and after his famous rant, Arquette checked himself into rehab. Cox doesn’t seem to be holding his loose lips against him. She told Bazaar, “He was on the show for entertainment.”

“If [the marriage] doesn’t work out, I will have huge waves of pain about failing in that department,” Cox told Bazaar. “The thing is, when you get older, it’s more about compatibility than it is about love…I’m kind of all over the place, and I need grounding. I want to be calm. I want to change a lot.”

You can check out the whole interview in the April issue.