Bachelor Brad Womack proudly professed his love to Emily Maynard on the show’s season finale last night. Personally, we don’t think they have a snowball’s chance in hell. What do you think? 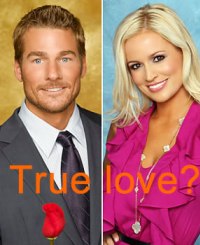 Ashley Hebert will be the new Bachelorette! >>

But let’s address the elephant in the room…

Brad and Emily had a pretty tense discussion the night before he proposed. Emily calmly asked Brad if he was ready to be a father to her daughter, Ricki. “Are you going to be able to handle sitting in the emergency room with a 5-year-old in the middle of the night?” Brad wasn’t having it. “I’m getting a little angry,” he said, before storming out of the hotel suite.

It’s a valid question, Brad: Are you prepared to face the realities of being both a husband and father to a 5-year-old? Psst, here’s a hint — stop being a little biotch and just say “yes.”

The ring is off

OK, now cut to After the Final Rose. The post-proposal show (which is usually just 30 minutes of gratuitous giggling and touching) was painful to watch. Emily announced the two were having problems. Apparently, watching your man tickle tongues with 15 other women does not a healthy relationship make. The duo have put their engagement on hold and are *air quotes* “working on things.”

All-in-all, the forecast is not looking sunny for these two. I give it two months before Brad shows up on the cover of US Weekly taking body shots off of Playboy models.

What do you think? Is it true love for these two? Or are they headed for Splitsville?