Vanessa Hudgens opens up to Shape magazine about her split with Zac Efron and her plan for starting a family. 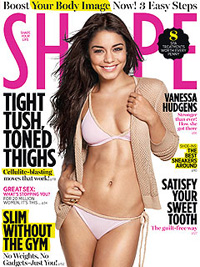 Disney star Vanessa Hudgens revealed more than her abs in the April issue of Shape magazine. The 22-year-old talked openly about her long-term relationship with her ex, Zac Efron.

“Long-distance relationships are hard no matter what,” she said. “When you don’t have face-to-face time, it’s just different. Having an iPhone helped, but it wasn’t the same.”

Hudgens, who met Efron while filming High School Musical, said that they “grew up together.”

“It was nice to have someone to share all of those experiences with. It was a good thing. The relationship kept me grounded, and because I was with someone who knew me so well, I didn’t need to try to be someone I’m not.”

The Beastly actress says that kids are definitely in her future. “I hope by the time I’m 30 to have a husband and maybe a baby. I love children. They’re so much fun, and I would have a blast spoiling them!”

In the meantime, Hudgens seems to be trying to shed her Disney image, appearing in more adult roles like in Sucker Punch and also with pictures hitting the web of Vanessa Hudgens kissing Zoey 101 star Alexa Nikolas.

Read on for more Vanessa Hudgens