The Rock and Roll Hall of Fame honored five legendary rockers on Monday night at the Waldorf Astoria in New York City. Rockers become eligible to be inducted 25 years after the release of their first song. Those who were inducted this year included Alice Cooper, Neil Diamond, Tom Waits, Dr. John and Darlene Love. 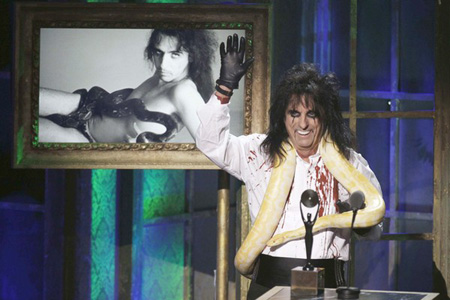 Cooper, who rose to fame with songs like School’s Out and Eighteen, was inducted by rocker Rob Zombie. True to form, Cooper wore a white shirt with blood stains, an albino snake wrapped around his neck and his signature black eye make-up. “We’ve always been a hard-rock band,” Cooper said. “We just wanted to decorate it a little differently.”

Neil Diamond came out taking pictures of the crowd. Paul Simon, who introduced Diamond, asked the audience, “Why so long? I have a theory. Six words: You Don’t Bring Me Flowers Anymore. Beautiful love song. Recorded with Barbra Streisand, one of the great voices of our time. But Barbra Streisand, rock and roll? I don’t think they even allow that kind of DNA near this place.”

Waits, who was introduced by Neil Young, told the audience his statuette was “really heavy.”

“I’m wondering if there’s a keychain version I can keep on me so some day a guy will say, ‘Pete, take the cuffs off — he’s a hall of famer,'” he said.

You can catch the 26th annual Rock and Roll Hall of Fame ceremony on March 20 at 9 p.m. on Fuse.