Pete Wentz has broken his silence over his split with wife Ashlee Simpson. 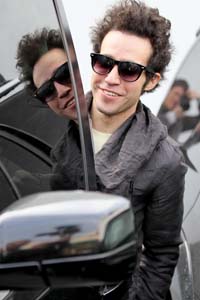 Pete Wentz is talking about his split with Ashlee Simpson — but if you’re looking for dirt, don’t expect to get it from him.

Wentz talked about the breakup with Ryan Seacrest, but didn’t comment on the rumors that Ashlee is already gettin’ it on with Wentz’s protege Craig Owens or the custody battle that’s brewing.

“It’s like Ashlee’s been my best friend for five years,” Wentz said Monday. “She’s the mother of my child. I have nothing but love and respect for her. Going through something like this isn’t easy, but we’re friends, and the most important thing is to put our son first.”

Wentz understandably wants to keep the more painful bits quiet, and that’s been a little easier thanks to an unlikely source.

“It’s hard to maintain your private life,” he says. “You want to do it, especially when there’s a kid involved. It’s like the one time on earth I’m like, ‘Thank God Charlie Sheen exists.'”

Break or no, the almost-former couple is still spending quality time together — they were spotted at an In-N-Out drive-thru in L.A. over the weekend.