Brad Womack got down on one knee and proposed to Emily Maynard, redeeming himself with a heartfelt proposal for the ages on the season finale of The Bachelor.

We hate to admit it, but the proposal by Bachelor Brad Womack to Emily Maynard on the season finale of The Bachelor was breathtaking. Going into the last 10 minutes however, we thought the ring could have gone to Chantal O’Brien. 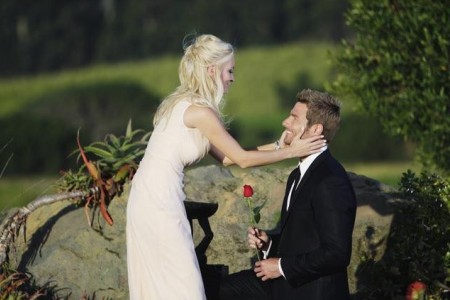 Brad Womack had one last order of business to attend to before he could make either of the ladies his bride-to-be: Introduce them to his family.

Looking back now, Chantal never really stood a chance. Brad’s family saw the instant spark between him and Chantal, but it was just that — a spark. It was romance and physical, but not the mature and lasting relationship they saw in Emily.

Brad’s mother instantly felt Emily was the one for him. His whole family pictured him being a husband, but more importantly, a father to Emily’s daughter Ricki. This was hard to compete with. Chantal put her best foot forward and fit right in with the Womacks as a guest, not as a family member.

After receiving the unanimous vote from his family, Bachelor Brad alluded to the fact that Emily was the perfect choice. Chantal weighed heavy on his mind, however. Brad met with both girls to get one last moment of clarity and it seemed to have put a damper on his and Emily’s love fest.

After stumbling over his words and trying to assure Emily of his intent towards loving Ricki and the possibility of their future, it seemed the two were left in a bad place. Emily already struggled with insecurities in regards to Brad’s feelings towards her compared to Chantal and it looked like the two might have just let everything get to them. 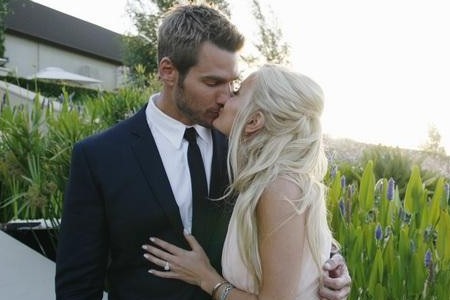 Chantal on the other hand, looked like she might have gotten under Brad’s skin by reminding him of their connection. We were fooled for a second thinking Chantal might have pulled ahead, but we put our money on Emily and cashed in.

After getting down on one knee and professing his love and desire to protect both Emily and her daughter, he proposed. It was the perfect proposal! “I’ve gone through so much to get to where I am today. I’ve made so many mistakes and had so many ups and downs. I always believed that when the time was right, I’d find the woman that I’ve been looking for for my entire life. I knew it would take opening up in ways I wasn’t used to… All it took was coming here and finding you,” Womack told Maynard during the proposal.

Brad could barely get the words out, they both cried and most importantly, he promised to provide for her daughter, which proved he was finally stepping up as a man. He concluded, “You’re so much more to me than a leap of faith. You’re the one. You’re my once in a lifetime. I’m asking you to give me your forever. Please let me be your best friend, let me protect you and your beautiful daughter and please give me the opportunity to love you for the rest of your life.”

What do you think of Brad Womack and Emily Maynard’s engagement? Do you think it was a fitting end to The Bachelor?