Morena Baccarin isn’t going to reveal any secrets from tonight’s season finale of the ABC smash V. We tried, but what Baccarin can dish is how a 1980s sci-fi cult hit was updated and became a certifiable hit. 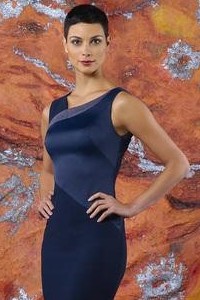 Morena Baccarin and the cast of V are about to leave fans for another long spring-summer break as the show’s big season finale will rock audiences at 9 p.m. on March 15. Baccarin called us to talk exclusively about her V experience and what it means to her, after a successful career of guest spots, to be the anchor of a primetime smash.

She also dishes the delight in portraying an evil character. Many an actor has admitted that being bad is good and Baccarin only continues the sentiment with her portrayal of Anna, the leader of alien “visitors” that may be on their way to destroying the human race as we know it.

SheKnows: I wanted to go back to the beginning when you first got the script for V, what was it about the story that made you want to be a part of the show?

Morena Baccarin: What wasn’t it that was great about the story [laughs]? I think it’s so fascinating. I watched the original as a little girl, so I remember it. But, I also love that idea of this alien invasion because it’s so incredibly crazy and it plays on so many of our fears, especially in this age when there’s so much fear of terrorism, the unknown and what’s coming at us that we don’t know. I think that reading of the pilot, it only reinforced that for me — that this update was a timely story.

SheKnows: I would think that the character that you play could also be a big appeal. It looks like you are having quite a blast with it.

Morena Baccarin: Yeah, definitely. I’m having a good time with this character. What’s not to love [laughs]?

V is for vicious evil leader

SheKnows: When you first tackled her, were there any nerves or apprehension? Because, as you said, you saw the original version and it is beloved in a lot of circles.

Morena Baccarin: I did have apprehension. When I read it, it occurred to me that it was an updated version of the show, so that was really great. We weren’t trying to redo something that had already been done. I think the show that was done in the 1980s did a really good job for that time period. We are just doing something different. My character was similar, I guess, to the original Diana — but very different. I felt like I could create my own thing. 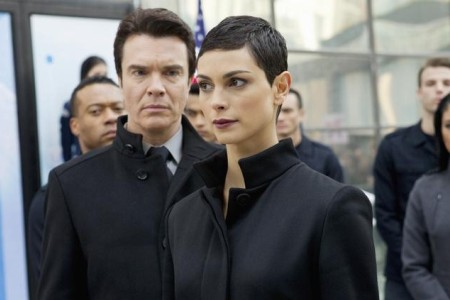 SheKnows: You mentioned how timely V is. I’m amazed at the writing and the scripts week in, week out. Can you talk a little bit about the writers and the incredible plots they deliver each week?

Morena Baccarin: Yeah, it’s really exciting. I never know who I’m going to be trashing or whose head I’m going to be eating [laughs]. It’s a fun role. I get to do some crazy stuff. I love that episode at the Vatican where Anna explains miracles to the College of Cardinals. She basically says I can outdo you and I can get all your followers to follow me [laughs]. It’s such a brilliant argument of science versus religion.

SheKnows: What has the reaction from the fans been like for you?

Morena Baccarin: It’s really weird to be recognized. It’s a bizarre feeling. It’s really nice and very humbling that people care and watch the show and want to see it. There’s a huge support and a huge fan base out there for the show. It’s so cool to be a part of that. It’s like you’re a part of a little family, a big family.

SheKnows: Absolutely. What was the oddest place that you were recognized?

Morena Baccarin: The other morning, I was sitting at my gym at the pool, and this guy was looking at me, and looking at me. He was an older guy. He looked like he was doing physical therapy at the pool, not somebody that I would imagine would recognize me. It was seven in the morning. He had goggles on. He said, “You’re the girl from V, right?” I was like, “How can you tell right now?” I was underwater and had goggles on. [Laughs] I looked like a dork. It was very bizarre. 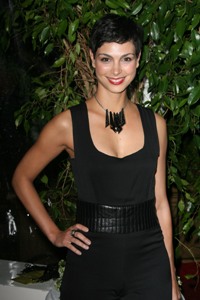 SheKnows: What is it like when you’re sharing scenes with Scott Wolf?
Morena Baccarin: It’s really fun. We’re goofing around and laughing our asses off. He’s a big foodie, too, so we’d love to go out to dinner with our significant others and we have eaten our way through Vancouver [laughs].

SheKnows: It seems like we’re in a golden age right now for actresses on TV and I see your role as right up there. Can you talk a little bit about the company you keep on television and what a wonderful menu of meaty parts there are for female actresses in this day and age on television?

Morena Baccarin: TV has surpassed everybody’s expectations. The quality of material on TV right now is really phenomenal. I’m thrilled to be in the company of all the actresses. One of my favorite shows to watch is The Good Wife, and seeing Julianna Margulies and Christine Baranski. I think there’s so much great acting on that show. Even silly shows like Modern Family, which I think is a phenomenal funny, funny show, all those actresses on that show are really great. I think there’s such versatility on TV right now, it’s really exciting to see women have that opportunity, and women of all ages.

SheKnows: I also see that you’ve got quite a lot of experience on the stage, how has the experience of working on the live stage enhanced your craft?

Morena Baccarin: It’s really challenging to do plays. It’s a different muscle that you’re exercising. I always find that when I come back from doing a play I’m a much braver actor than I was going in. I’ve had several moments on stage where I’m like, “OMG, somebody get me back to my TV job.” It’s so much safer there [laughs].