Two girls were evicted from a Liverpool hotel after they snuck into Justin Bieber’s suite, took pictures of his stuff and even climbed into his bed! 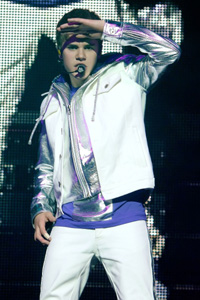 Two overzealous girls, ages 16 and 18, plotted an elaborate scheme to get into the hotel suite of Justin Bieber. The two girls dressed up as housekeepers and managed to sneak into his Liverpool hotel.

“The hotel was swamped by fans all desperate to catch a glimpse of Justin,” a source said. “But two particularly enterprising girls snuck in through a side entrance and stole two housekeeping outfits.”

“After ditching their regular clothes and slipping into their new costumes, they got the lift to Justin’s suite and knocked on the door, calling, ‘Housekeeping.’ Having been allowed in, the girls began half-heartedly polishing tables and dusting surfaces.”

Then, the girls took pictures of his belongings and even climbed into his bed! How did they get caught?

“No one realized until the girls were alone, and in his bedroom taking pictures of his personal possessions on their phones. A member of Justin’s entourage in another part of the suites heard them giggling and came through catching them in the act.”

The two girls were immediately evicted from the hotel. Bieber is said to be “furious” after hearing of the event.

Things must have been crazy in Liverpool! Police had threatened to arrest Bieber if he went out on the balcony to wave to fans because they feared he would start a riot.