Ryan Phillippe does not portray the nicest fellow in The Lincoln Lawyer. But, that does not make his character guilty of attempted murder, and thus is Matthew McConaughey’s job as the titular lawyer. McConaughey is attorney Mick Haller and must prove that Phillippe’s character Louis Roulet is innocent.

Besides an outstanding script based on a bestselling novel, Ryan Phillippe was drawn to The Lincoln Lawyer because the film takes place in Los Angeles. He could make an incredible film, working with some of the best in the business such as Matthew McConaughey, William H. Macy, Marisa Tomei and Michael Pena (Battle: Los Angeles), while still being able to come home to his children each night. 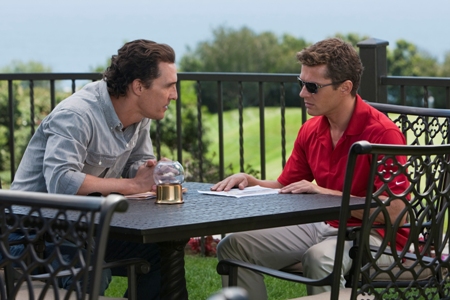 The Lincoln Lawyer is the story of Mick Haller (McConaughey), an attorney who works out of the back of his black Lincoln. He gets a tip about a Beverly Hills man, Roulet (Phillippe), who has been charged with attempted murder of a female companion. After meeting Roulet, McConaughey’s Haller takes the case and immediately everything is not what it seems.

Stay with SheKnows all week as we interview the cast including McConaughey, Pena and country superstar Trace Adkins, who also appears in the film. And don’t miss our review on March 18.

SheKnows: How did this script come to you and what was your initial reaction?

Ryan Phillippe: They didn’t necessarily want me to play this role. I had to fight for this. I had to audition for this, which is not always the case, at this point in my career. But, this character’s function to the movie is pretty integral, so if it didn’t work, that may have meant that the film itself didn’t work. I think it was important for the filmmakers to see what an actor might do with it. Brad (Director Brad Furman) told me that 200 guys auditioned for this part, and I was one of them, and that doesn’t bother me. I think that makes perfect sense. As I move into directing, there are certain parts where you need to see what someone is going to do with it. The motivating factor behind that is that a lot of what I’ve been reading the last couple of years has been thin, one-dimensional and uninspiring. So, to read something that I could actually sink my teeth in was great. That’s why we ended up with the ensemble we did. We have great actors in small-ish parts because of that fact. Actors want substance and there just isn’t a lot of that out there right now. 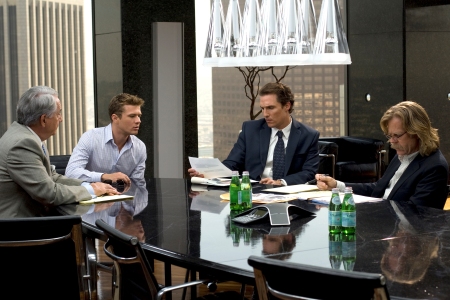 SheKnows: How did you get into the mind-set you needed for this role? He’s not such a black and white character.

Ryan Phillippe: In my career, I’ve often played the protagonist or the hero of the movie, and there are so many rules inherent to that role. The audience needs to stay with you, identify with you and like you. When you play the bad guy, those rules go out the window. There’s so much freedom there. The bulk of my research had to do with the novel. That became such a reference tool and a bible for both Matthew (McConaughey) and I to check in with before we filmed certain scenes. I also spent some time watching interviews with Joran van der Sloot. I thought there was something about his arrogance and his belief that he would get away with what he’d done that related to Louis. Beyond that, it was just about trying to “F” with Matthew. In some scenes, he’d win. In some scenes, I’d win. We intentionally didn’t rehearse very much, so that it would be fresh and we would be able to catch each other off guard. I think we had pretty good dude chemistry together.

SheKnows: Did you enjoy portraying someone who is evil?

Ryan Phillippe: Absolutely! It’s more fun. We all have some element of darkness within us, however that manifests. It’s cool to get it out of your system, and then go home and cook dinner for the kids. When I was younger, it was much more difficult for me to separate myself from the work I was doing. I was just stupid and dramatic and I’d get caught up in it. Now, as soon as they say we’re wrapped, I’m out. I’m in the car, the hip-hop is on and I’m going home. It’s a much different approach now.

SheKnows: How was it to work with director Brad Furman on The Lincoln Lawyer?

Ryan Phillippe: It was great. We’re both from the same area and we are the same age, so we have a lot of similar cultural touchstones. The greatest thing about Brad, in reference to this movie, is that in the hands of an older, more seasoned director, I think it could have fallen into more predictable territory. It was so important to him to really emphasize the hip-hop aspect of it, make sure that he shook it up and that there was an edge. He was determined for it not to be boring. There were days on the set where, if we were shooting something and he felt like it was standard, he was like, “Oh, this is the most boring scene I’ve ever seen in my life!” So, he’d try to find a way to shake it up. But, I loved that. I love that candor and his passion.

SheKnows: Did you get to hang out with Matthew McConaughey off the set at all?

Ryan Phillippe: Further into the production, we spent more casual time together. In the beginning, we intentionally kept a distance, but towards the end, we were hanging out in his super-awesome trailer which he goes everywhere in. He slept in that trailer a lot [laughs]. He lives out in Malibu and we were shooting in downtown L.A. every day. The commute was drastic enough that, on a lot of nights, Matthew would sleep downtown in his trailer, in the parking lot, in the middle of the city of L.A.

Ryan on staying close to his kids 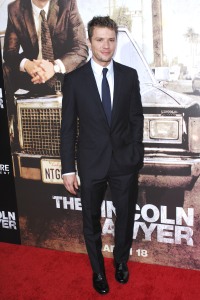 SheKnows: Was part of the appeal of The Lincoln Lawyer the fact that it is a true L.A. story and it would keep you close to home?
Ryan Phillippe: Oh, yeah. I’ve done nearly 30 movies now and parts of four have shot in L.A. You hate having to go on location, especially once you have children. It was so great to be able to come home every day and sleep in my own bed and have dinner with the kids, or see friends on the weekend. Also, L.A. has been a character in so many movies, but not necessarily from this perspective. You often see the palm tree-lined streets of Beverly Hills, Bel Air and Malibu, but less than five-percent of the citizens of this city live that way. You’re seeing a more authentic, gritty L.A. I’ve lived here almost 15 years and hadn’t spent that much time downtown. I fell in love with it. There are some undiscovered gems there that I’ve come to love.

SheKnows: How do you decide what’s next for you?

Ryan Phillippe: I haven’t had the most successful box office career, by any stretch, but I do like that I’m not so defined yet. You don’t look at me and say, “Oh, that guy only makes those kinds of movies,” or “He only plays those kinds of parts.” If that were to ever happen, I think I would lose all interest. Also, at the same time, you can have what looks like a great character in an otherwise awful script, and that’s not worth your while either. It really has to be about the totality of it and a story that compels you. I only want to make movies I want to see. That may mean my career is somewhat limited, but that is my version of integrity. That way, no matter how it performs or how it’s received, I can be okay with it. The idea of being in a hugely successful movie that you don’t like would be just as bad as being in a film that you love that no one sees. I wouldn’t want the kind of success that felt cheap or that I didn’t own.

SheKnows: What are you doing next?

Ryan Phillippe: I’m about to start shooting a movie in New York, called Chronicle, with Justin Long, John Hawkes from Winter’s Bone, Ben Foster and Kate Mara. It’s sort of the Wall Street of marijuana distribution. It’s based on a true story. And, I’ve got a film coming out, called The Bang Bang Club, about combat photographers at the end of apartheid. And, I finished an action movie with Bruce Willis, called The Setup, due this winter.

SheKnows: Back to Lincoln Lawyer, how difficult was it to shoot the re-enactments of the crime? Physically, was it challenging, and even emotional? 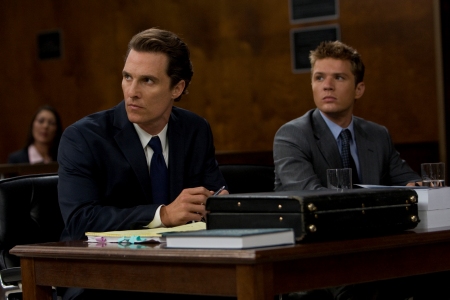 Ryan Phillippe: That certainly was the most difficult for me. I’ve got three sisters and a daughter. Violence against women is beyond repugnant to me. And, I’m incredibly sensitive to the actresses and even the stunt women, who often like to project that they’re tougher than you are. I was really nervous for them. At that point, I didn’t feel like I was completely as lost or as immersed in those moments as I’d like to be because I was too concerned for their welfare. But, those things are so heavily choreographed and rehearsed. That is the one part of the movie that it was absolutely a must that we did it over and over and over, like a dance. The margin of error was very slim, and people get injured on film sets all the time, and I certainly didn’t want to be responsible for that.

SheKnows: Did everyone stay uninjured?

Ryan Phillippe: Yeah, they did. But, there was a take where I threw the stunt woman through this mirror, and it was real glass, and she was lying on the ground, surrounded by these jagged shards of mirror. Though it was not what I was supposed to do in the scene, I picked her up out of it as soon as they called, “Cut!” and I think they kept it rolling and it’s still in the movie. I was so worried about her moving in any direction and being sliced open that I physically lifted her and carried her out of the mess.