Jake Gyllenhaal had a little run-in with a guy doing just that at the SXSW film festival. Can’t a guy hit the john without having his picture taken? 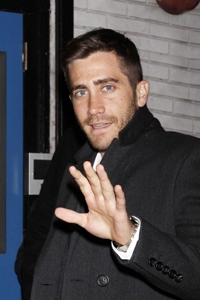 Jake Gyllenhaal was at the South by Southwest (SXSW) film festival this weekend, promoting his new film Source Code.

While in the bathroom, some guy took a picture of him!

According to TMZ, there was a bit of a discussion and the pic was deleted. Ugh, is there no decency? Disgusting.

Jake Gyllenhaal had a good attitude about it, however.

He later told Entertainment Weekly that it was indeed true, saying, “I think it’s an appropriate space to keep privacy. I hope that people wouldn’t disagree with me on that.”

Source Code is the story of a soldier who wakes up in the body of an unknown man and discovers he’s part of a mission to find the bomber of a Chicago commuter train. The film also stars Michelle Monaghan and Vera Farmiga and is directed by Duncan Jones (son of David Bowie) who brought us the stunning (though sadly, little seen) sci-fi film Moon.