Lisa Rinna got the ax from Donald Trump on last night’s Celebrity Apprentice. Find out who threw her under the bus.

Lisa Rinna was fired from last night’s Celebrity Apprentice after being the losing project manager on the women’s team. The task was to design and write a children’s book and perform it for a room full of children. Rinna’s team came up with the idea of a young lion who couldn’t find her roar (which Donald Trump Jr. thought was a copycat of The Wizard of Oz) and the men’s team decided on a story of accepting a new classmate, played by Lil Jon. 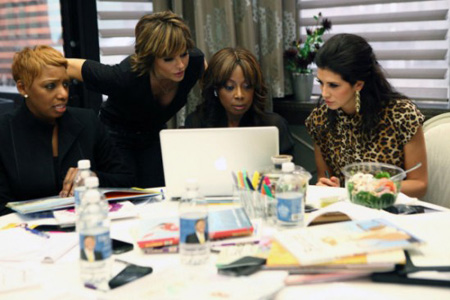 The women’s team was full of strong personalities (Dionne Warwick, Star Jones) that Rinna had a hard time controlling.

“When you try to take down the queen, you better kill her,” Jones quipped.

Rinna, who didn’t want to be project manager to begin with, knew that it would be a tough boardroom. “They threw me under the bus!” Rinna said of her difficult teammates.

“I was a bit ‘heartless’ last night…but strategic for a long-term plan,” Jones tweeted, in defense. “It wasn’t personal…it was all business.”

The men’s team, headed up by project manager Meatloaf, won the event which included $20,000 to go towards his charity of choice.

Rinna seems to be taking it all in stride, tweeting: “Have I told you lately that I love you?! This girl feels your love and I thank you all!!”

Between Jones and Warwick posturing over who will be alpha female (did they forget this is for charity?), it was refreshing to see Marlee Matlin stand up for herself and not be intimidated in the boardroom.

Read on for More Celebrity Apprentice