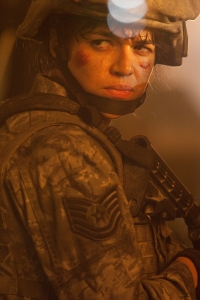 Battle: Los Angeles, an action packed tale of aliens descending on the City of Angels, topped this weekend’s box office with a respectable opening weekend of $36 million.

Johnny Depp’s animated flick Rango sat atop the box office last week but slithered down to the number two spot with $23 million this week. Amanda Seyfried’s fairy tale redo about the girl in red, Red Riding Hood, followed behind Rango with $14.1 million. The Adjustment Bureau sat at number four with $11.4 million while Mars Needs Moms rounded out the top five with a debut of $6.8 million.

Owen Wilson’s comedy, Hall Pass, about getting a week off from marriage, came in at number six with $5.1 million while the modern take on Beauty and the Beast, Beastly, brought in $5.09 million. Adam Sandler and Jennifer Aniston added another $4 million to their Just Go With It gross total of $93.9 million.

The King’s Speech continues to add to its gross total which is now at $129 million. The Academy Award-winning film came in at number nine with $3.6 million. The animated movie about lawn gnomes in love, Gnomeo and Juliet, rounded out the top ten with $3.5 million.

Did you see Battle: Los Angeles this weekend? What did you think?