Charlie Sheen is taking his warlock awesomeness on the road beginning April 2 and for those of you buying tickets you’ll be donating to a fantastic cause — helping victims of Japan’s earthquake and tsunami. 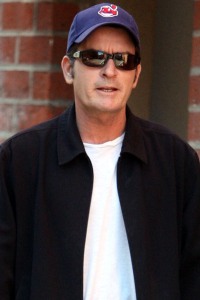 Beginning April 2, Charlie Sheen will be on the road. Tickets for Sheen’s Detroit and Chicago shows Charlie Sheen LIVE: My Violent Torpedo of Truth/Defeat is Not an Option sold out in 18 minutes.

For those of you not lucky enough to be in the Detroit or Chicago area on April 2 or 3, word is the actor will be adding additional shows in other cities.

Charlie Sheen tweeted in regards to his ticket sales, “Fastball; Detroit/Chicago sold out in minutes… Thanks to Sheen’s Cadre..! #WINNING c”

Charlie Sheen will also be using his ticket sales to aid the victims of Japan’s recent earthquake and tsunami. Sheen revealed on his website, charliesheen.com, that he plans to help Japan by donating $1 from every ticket sale to the Red Cross in order to help the victims.

He also tweeted after the catastrophic earthquake, “Curveball; Warlock edict; pain & devastation in Japan demands us all to dig deep & LOVE THEM VIOLENTLY Dogspeed my cadres of the Far East! C”

If you’re wondering what you’ll see during Charlie Sheen’s live show, just look no further than the official description advertised on Ticketmaster’s website. “I’m going on the road. Live. Will there be surprises? Will there be guests? Will there be mayhem? Will you ask questions? Will you laugh? Will you scream? Will you know the truth? Will there be more?!?! This is where you will hear the real story from the Warlock. Bring it. I dare you to keep up with me.”