Victoria Beckham already has a house full of boys so the news that she’s expecting a baby girl couldn’t be sweeter. 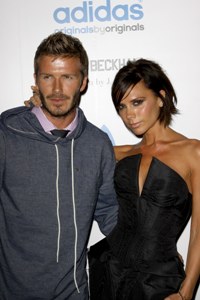 David and Victoria Beckham are adding a baby girl to their growing brood — finally. David Beckham broke the news during an L.A. Galaxy soccer luncheon.

With three pregnancies all producing boys, it’s not hard to see why the couple would be surprised. “Obviously, we’re very lucky to be expecting again, and this is the first time I’m going to say it: It’s a little girl,” revealed David Beckham. “We’re still in shock. Obviously, having three boys, you kind of expect another one, so finding out a little girl is in there is surprising, but, obviously, we are over the moon.”

Having another girl in the Beckham’s testosterone-filled house will be quite a change. The couple’s sons Brooklyn, Romeo and Cruz are already fired up about baby girl Beckham. “Our three boys are happy and excited, and Victoria is doing well,” David Beckham said.

Victoria Beckham has been very vocal about the couple’s desire for a large family. Something tells us this new baby will be dressed to the nines with a designer mother like Victoria Beckham.

Congratulations go out to David and Victoria Beckham on the news they’ll finally be getting their little girl.