Lindsay Lohan rejected a plea deal that would have sent her to jail for three months. However, Lohan might be facing a lot more time than that. 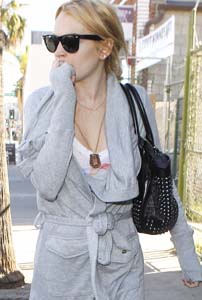 Lindsay Lohan might think she’s avoiding a jail sentence by turning down judge Keith Schwartz’ plea deal, but she should probably think again. A source told TMZ that Lohan could face actual prison time if she’s convicted of the felony charge of grand theft.

Why? Because of her probation report that contains “devatating” and “shocking” info on the actress. Judge Schwartz’ job is to try and arrange a plea deal with the actress — which is why he’s going so easy on her. Her case judge, Stephanie Sautner, will consider the report when she decides whether or not to sentence the actress for a violation probabtion. Lohan can get a year just for that.

And if she’s convicted of grand theft? That’s another year in state prison. However, Lohan’s lawyer, Shawn Chapman Holley, is confident in the decision to reject the plea deal.

“Judge Schwartz made it abundantly clear Thursday, on the record, that the probation violation, if proven, would be based on the theft allegation and nothing more. If there was such ‘devastating’ information in the Probation Report, wouldn’t the allegations be based on that?” Holley told TMZ.

We think Lohan would’ve been better off if she just took the plea deal and got it over with. She’s banking on the idea that a jury won’t convict her – but we’re not too convinced about that.

What do you think? Was Lindsay Lohan right to reject a plea deal?