Taylor Lautner and Kristen Stewart were evacuated off the Breaking Dawn set after tsunami advisories were given to the North American West Coast. 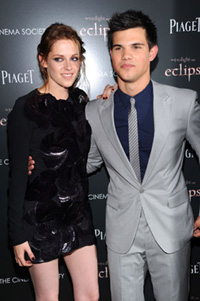 The filming of Twilight: Breaking Dawn was put on hold after Taylor Lautner, Kristen Stewart and the rest of the cast and crew were evacuated from Vancouver Island beach after the North American West Coast was placed on tsunami alert.

The 8.9 magnitude earthquake that struck Japan early Friday morning has placed the entire West Coast and Hawaii on high alert for tsunamis, however, rest easy Twi-hards, the actors do not appear to be in any danger.

They are filming Breaking Dawn on Tofino, which contains a long and open stretch of beach.

“They’re evacuating us 4 a tsunami warning. If this … is my last my tweet. I love you. The end. Hugz. If this is the moment. Then I’ve lived a good life. And I’m thankful 4 everything I’ve been given.”

No word on where Lautner, Stewart and the rest of the cast were evacuated to, but the 150 residents of the town were reportedly told to be on alert, but were not evacuated.