Twilight Saga: Breaking Dawn star Nikki Reed slipped when talking to reporters and may have confirmed what we already suspected — that Robert Pattinson and Kristen Stewart are a couple and could even be living together!

Twilight news spreads fast — and no one was more surprised by this than Nikki Reed, who plays Rosalie in the hit saga. In fact, as she was talking to reporters, she may have confirmed that camera-shy couple Robert Pattinson and Kristen Stewart are indeed together! 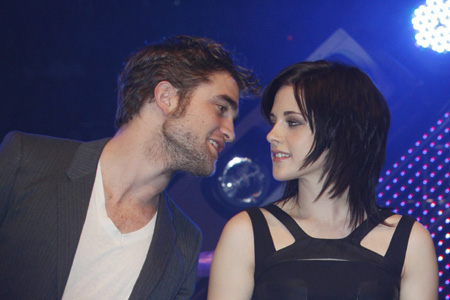 OK! magazine asked Reed about Pattinson’s new dog on Wednesday and if he has brought the dog to the set of Breaking Dawn. “How’d you know that? It’s just so weird to me, I don’t mean to say this to you, but it’s just sort of gross. I mean that’s just such a question when he got the dog like 72 hours ago!” she said, referring to the fact that Pattinson’s new dog is such big news.

Reed went on to say, “Yes, it was like two weeks ago. But the dog is super cute and it looks like a miniature version of my dog.”

She goes on to say that it is their dog, not just his dog — as in he and Kristen Stewart? “I didn’t even know that they got a dog, but when I came to set I saw the dog and they all said that it was a version of mine!” she said.

When asked who they are, Reed quickly backtracked. “Oh, no it’s Rob’s dog, it’s just that it becomes a community dog on set,” she said. “All of our animals do.”

Tell us: What do you think? Just an innocent slip-up — or did she just confirm that Robert Pattinson and Kristen Stewart are indeed a couple and have just bought a dog together?