Los Angeles police searched Charlie Sheen’s California home for firearms and ammunition on the evening of March 10. Did they find anything? 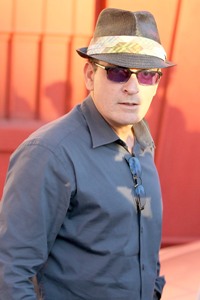 Police showed up at Charlie Sheen‘s home at 7:30 p.m. Thursday night in search of firearms and ammunition.

“We were there to investigate the possible violation of a restraining order. It came to our attention that Mr. Charlie Sheen is a registered owner of firearms so we were making sure there were no firearms or ammunition in the home,” LAPD spokeswoman Norma Eisenman explained to UsMagazine.com.

Charlie Sheen would have been in violation of the temporary restraining order placed on him by Brooke Mueller.

Whether or not they found anything after the three-hour search besides an antique weapon and bullets is being kept mum at the moment.

“We are not releasing any findings. Mr. Sheen was very cooperative and the investigation is complete,” Norma Eisenman assured. “We are done with it.”

While Charlie Sheen was not arrested, it didn’t stop the Internet from blowing up with his latest problems.

As news choppers circled Sheen’s home, he assured fans via Twitter he was fine. “All good here on homefront. All reports are false. I’ll explain more very soon,” he tweeted.

After they left his home, Charlie Sheen updated, “The LAPD were awesome. Absolute pros! They can protect and serve this Warlock anytime!”

The search came right on the heels of the announcement that Charlie Sheen is initiating a $100 million lawsuit against Warner Bros. and the creator of Two and a Half Men, Chuck Lorre.