Amanda Seyfried stars in Red Riding Hood and wears the outerwear of the title nicely. We wish there were many more nice things to say about Red Riding Hood.

Updating a classic is difficult. Effectively bringing to life a seven-century-old fairy tale is almost impossible. There are some distinct changes from the original tale, as well as the iconic Grimm fairy tale version. For one, in Red Riding Hood, the wolf here is a werewolf and its human form is determined to be a resident of a small, isolated village in the mountains. 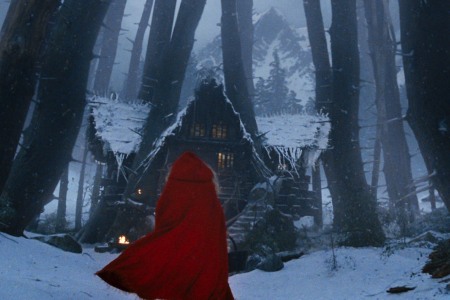 After a few grizzly deaths, an authoritative man of God arrives (Gary Oldman), espousing to know how to rid the village of this frightful creature. As inhabited by Oldman, he is every bit as morally vague as you can imagine. But unfortunately, the script or direction fails him. There are more questions than answers.

Yes, Amanda Seyfried scores as Valerie (Red Riding Hood) with her wide-eyed performance but neither of her love interests, Shiloh Fernandez or Max Irons, turns in a terribly good performance. Again, it is probably not completely their fault. Perhaps the words failed them or even more likely — and it pains us to say this because we love her — maybe it’s their director. Perhaps it’s just a simple swing and a miss.

The romance of Red Riding Hood also simmers when it should boil. Irons, Fernandez and Seyfried are in a love triangle with a werewolf on the loose. Yet, there’s no drama. Seyfried’s Valerie is set to marry Henry in an arranged marriage while she is truly in love with Fernandez’s Peter. Henry is wealthy and Peter is poor, but that is no matter. Seyfried only has eyes for Peter. In between werewolf attacks, the three move about more going through the motions than solidifying a strong trio.

It is hard to say what it is about Red Riding Hood that is so wrong. It could be that the actual trip to grandmother’s house was a little more silly than scary. What can be said in a movie review when the actors show up to play but the story, script and pacing leave their performances feeling flat and the film feeling far less interesting than it could have been?