Disney’s Mars Needs Moms is the culmination of a Herculean effort to bring the film to the big screen. The story of Mars Needs Moms is essentially of a nine-year-old boy, who after a fight with his mother, decides to go apologize and sees her being abducted by Martians.

Milo (Seth Green) winds up on the ship as it takes off only to realize this is no videogame. He is being rocketed to Mars. Of course, he faints. 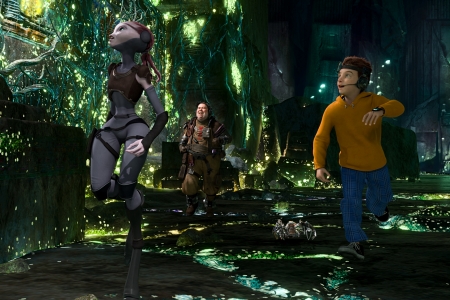 When Milo awakens, he realizes he has entered a world beyond his wildest dreams. As an audience member, the scenery, the 3D element, the colors and the method in which they were used all add up to one fun movie experience.

Mars Needs Moms, technically, is from the team who created The Polar Express and A Christmas Carol and the motion capture technology has grown significantly, judging by Disney’s latest film. As used by director Simon Wells, the technology-created visuals match his sincere and heartwarming story.

The script for the film was written by Wendy Wells, and yes, director Simon is her husband. They adapted Berkeley Breathed’s book and took what was a real fight between a mother and son over eating broccoli and put it on screen setting an entire Disney movie in motion.

When Milo lands on Mars he meets Gribble, a man who himself was stranded on Mars as a boy. The ’80s references he fires at breakneck speed when he finally has someone to talk to in Milo is a triumph as delivered by Dan Fogler. Equally compelling is the utter joy exuded by Elisabeth Harnois as Ki, a Martian with a rebellious streak a mile long.

Milo must find his mother (Joan Cusack) and rescue her, but first he finds out why Mars Needs Moms. We won’t spoil the answer to that question because it does enhance the experience of seeing the film. But, if Milo doesn’t rescue his mother in a number of hours, she will not survive.

Mars Needs Moms is one of those films that if it is to be seen, it should be seen on the big screen, not simply because of the 3D potential, but because of the scale of what is on screen. There are literal levels to the Wells’ Mars and contextually each one is tonally different. The feel, the music and the characters fit into succinct groups that inherently add depth to the film.

The most charming aspect of Mars Needs Moms is how there’s a concrete message about parents and their role in raising children. It is subtle so that while the splendor on screen entertains the young, when the credits roll, the hugs commence. Maybe that’s why I wanted to hug my mom when I left the theater.