On screen, the planet has been invaded by aliens countless times. In Battle: Los Angeles, director Jonathan Liebesman has created a war of the worlds that stands up to the best in the sub-genre with a killer cast including Aaron Eckhart and Michelle Rodriguez.

Where Battle: Los Angeles works so well is in its spirit — it is less a science fiction film and more of a classic war movie. Aaron Eckhart stars as a staff sergeant charged with taking a group of Marines into the alien attack battle zone of Los Angeles that is established early on as Earth’s last great hope for victory. 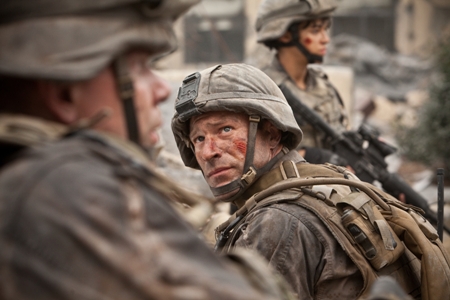 The film commences in a typical Southern California morning way. Audiences get the obligatory quick character introductions while a subplot is buzzing in their ears. The sound is approaching anxiety. News reports seen throughout the first few minutes of the film paint a picture of a planet bracing for a massive meteor shower. Clearly, a fiery ball of space rock, this is not.

Battle: Los Angeles, like many war-disaster films before it, showcases what can happen when people respond to the call of greatness.

There are civilians who are trapped behind enemy lines and Eckhart and his crew must lead them to safety. Filmmaker Liebesman establishes the alien ships and the soldiers early in a way that paints Battle: Los Angeles’ suspense in tight strokes of nervousness. The film is shot documentary style and the cameras jerking around further enhance the invasion sensation.

The scenes in Santa Monica where Eckhart and his Marines are trapped trying to rescue civilians, take the film and move it from a broad full-on alien attack to a hand-to-hand heart-pounding firsthand experience.

Although action, drama and technology are stars of Battle: Los Angeles, the cast that supports Eckhart rocks. Standout Michael Pena leads the survivors as the regular guy, heart and soul of the film. Then there are the soldiers. Michelle Rodriguez also gets to flex her muscles as a member of the Air Force who hooks up with Eckhart’s Marines. And last, but not least, Bridget Moynahan is perfectly cast in one of her first big-budget films. 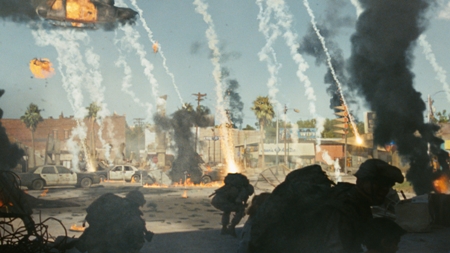 When we spoke to Aaron Eckhart, he told us that the most important aspect of making Battle: Los Angeles was shining a bright light on the U.S. military. This film does that in droves. As the movie progresses, those characters that we were briefly introduced to at the beginning fill out as the tragedy in front of them defines them to their souls and the audience is wrapped around the cast’s fingers.

Whether there are story holes or not is irrelevant because the pulsating action on screen with the pervasive threat of ambush, attack or some other startling find remains constant and it is impossible to have your mind anywhere else except locked into the Battle on screen.

Summer comes early with Battle: Los Angeles. This is pure popcorn fun for the whole family, if your kids are teens — it’s PG-13! Where many would define the summer movie season as starting in May, Battle: Los Angeles certainly makes it feel hot out there in March.