Police in Liverpool, England have threatened to arrest Justin Bieber if he so much as steps out onto the balcony of his hotel room because they’re afraid he’ll start a riot! 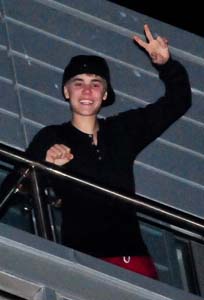 Justin Bieber was warned by police in Liverpool, England that a sighting of him could incite the frenzied fans gathered outside his hotel into a riot — and they’ve told the Biebs and his peeps they could be arrested if they don’t keep a low profile!

“I cant even say hi to my fans outside because of the police,” he tweeted. “Some bull.”

“There are like thousands of people out there. Love everybody but gonna try and get some sleep. Please don’t scream lol.”

“This is crazy! Trying to work it out so I can say whatup to my fans. I love you guys!”

Hundreds of screaming fans waited hours for Bieber to make an appearance. Police eventually relented with the hope that a quick Bieber sighting would satisfy the fans and allowed the singer to say a quick hello from his balcony — but the throng is still there.

By the way, Bieber’s entourage took the threat of arrest very seriously because it has actually happened before. Island Def Jam vice president James Roppo was arrested and charged with assault, endangering the welfare of a child, obstructing government administration, reckless endangerment and criminal nuisance after a November 2009 incident in which 3,000 fans created a scary mob-like situation during a planned Bieber appearance at a Long Island mall.