Charlie Sheen has filed a $100 million lawsuit against Warner Bros. and Chuck Lorre on behalf of himself and the cast and crew of Two and a Half Men. 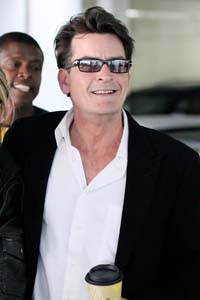 Charlie Sheen is suing Two and a Half Men creator Chuck Lorre and Warner Bros. for $100 million because he says they violated his contract when they fired him.

But don’t worry, Charlie isn’t totally greedy — he says he is suing on behalf of the rest of the cast and crew, too.

“Chuck Lorre, one of the richest men in television who is worth hundreds of millions of dollars, believes himself to be so wealthy and powerful that he can unilaterally decide to take money away from the dedicated cast and crew of the popular television series, Two and a Half Men, in order to serve his own ego and self-interest, and make the star of the Series the scapegoat for Lorre’s own conduct,” the paperwork filed today says.

A key part of his case is that while Warner Bros. says they fired him because he violated the morals clause of his contract, Sheen points out that the company actually renegotiated his contract when he was facing felony charges for threatening to slash the throat of his ex-wife Brooke Mueller.

What does this come down to? Sheen says Lorre is simply ticked off that the actor bad-mouthed him to the press and that Warner Bros. is “capitulating to Lorre’s egotistical desire to punish Mr. Sheen.”

Sheen is demanding to be paid for the remaining eight episodes of the season and wants the rest of the cast and crew to be compensated, as well.