Kelsey Grammer is gearing up to be a grandfather. His daughter, Spencer Grammer, is pregnant with her first child. 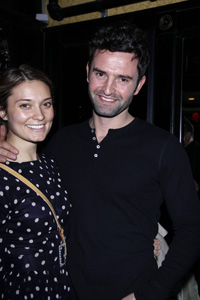 Greek star Spencer Grammer and her husband, James Hesketh, are expecting their first child together. Spencer married Hesketh on February 11, 2011 at City Hall, with Kelsey Grammer and his new wife, 29-year-old Kayte Walsh, in attendance.

He gave her a simple, yet beautiful ring, says Life & Style. “Rather than a traditional engagement ring, James gave her a claddagh ring (a traditional Irish ring that can be worn as a wedding ring). It’s very simple, but very beautiful,” a source reveals.

Twenty-seven-year-old Spencer is “early on” in her pregnancy — and found out she was pregnant right before her wedding, a source reveals.

Spencer is the daughter of Grammer, 56, and his first wife, Doreen Alderman, whom he split up with in 1990. He actually wed Kayte Walsh on February 25 — so it has been a busy month for the Grammer family!

Although this is the first child for Spencer and James, the baby will have plenty of playmates in the Grammer family. Kelsey’s two children from his ex-wife, Real Housewives of Beverly Hills’ Camille Grammer, are nine years old and six years old. Kelsey’s new wife, Walsh, reportedly was pregnant late last year, however, she suffered a miscarriage.