Lindsay Lohan has turned down a plea deal in the case against her in which she’s accused of stealing a $2,500 necklace. Will Lohan go back to jail? 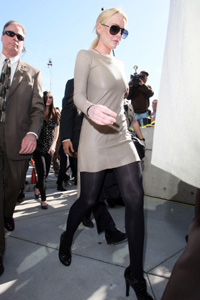 Lindsay Lohan is headed towards a trial for allegedly stealing a $2,500 necklace from Kamofie & Co.

The actress arrived to court in a conservative tan dress (35 minutes late) and did not accept the plea deal, which possibly included jail time. Judge Keith Schwartz set a pre-trial hearing for April 22 with a different judge.

Why did she reject the plea deal? Lohan’s attorney, Shawn Chapman Holley, did not like the sentence handed down if she pleaded guilty to felony grand theft. TMZ is reporting that prosecutor Danette Meyers wanted Lohan to get six months in jail, however, Holley was hoping the judge had a better sentence in mind.

Judge Schwartz reportedly wanted Lohan to spend possibly three months in jail if she pleaded guilty or no contest. Lohan was hoping for no jail time, of course, so she rejected the plea deal.

Lohan can still plead guilty or no contest when she returns on March 25 for a preliminary hearing and accept his plea deal. However, if she doesn’t, a preliminary hearing is set for April 22. If at that time they determine she violated her probation, she will go to jail as she awaits trial.

It looks like either way, Lohan could be looking at more jail time.