Battle: Los Angeles star Michelle Rodriguez is confident in her persona. She wouldn’t have it any other way. A self-admitted geek who enjoys doing her own stunts, Battle: Los Angeles proved the perfect film for her to continue her kick-ass, take no prisoners body of characters that began with Girlfight and has built a following through films such as The Fast and the Furious, Blue Crush, Avatar, Machete and now Battle: Los Angeles. 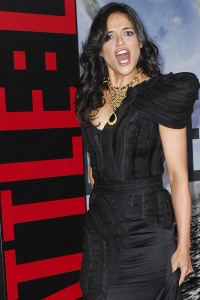 Michelle Rodriguez enters the room, dressed casually in a loose-fitting blouse and jeans, ready to do battle with an army of questions about her career and her latest action flick, Battle: Los Angeles.

SheKnows: You’ve made some pretty intense films in your career. How does Battle: Los Angeles rank?

Michelle Rodriguez: It was pretty gnarly, man. I had to train with all the Marine dudes, even though my character is an Air Force tech. That training was intense. It was incredibly cold at night and so hot during the day. Every morning we would run two miles, and then train all day. It was 110 degrees in Louisiana and we were carrying packs that were about half of what regular soldiers carry in equipment. We practiced taking guns apart, putting them back together and shooting them. It was pretty awesome [laughs]. The Marines that trained us had no remorse. We had actors throwing up [laughs]. Like I said, it was pretty gnarly. But, you know what? I love that stuff. Bring it on, baby!

SheKnows: How hard was it to maintain the intensity of a soldier in war, over the course of the entire shoot?

Michelle Rodriguez: It was pretty easy, because of the fact it was so hot and miserable. You’ve got smoke everywhere with these amazing sets where everything’s destroyed — you felt like you were at war. The misery that came with the long days only added to the reality of the whole thing. The follow-through was simple at that point. Also, Aaron Eckhart is so awesome. It was pretty easy as soon as he walked on set and he starts yapping away, I was in it.

SheKnows: Your character, although military tough, is kind of a geek with her tech savvy. Was that an appeal for you for this film?

Michelle Rodriguez: Yeah, there is a part of me that is a serious geek and I’ve been dying to play a geeky character [laughs]. I needed to let that shine and have it immortalized on film.

SheKnows: Does the geek culture appreciation potential of Battle: Los Angeles appeal to you? 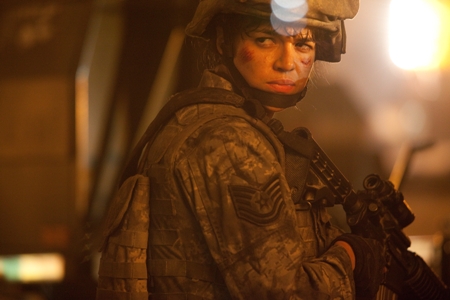 Michelle Rodriguez: Dude, that’s my world. I’m at home at Comic-Con, are you kidding me? I’m a geek for life.

SheKnows: After Avatar, are you used to working with nothing? For instance, the aliens are clearly not real even if the sets are stellar.

Michelle Rodriguez: What’s awesome about this flick, just like Avatar, is you didn’t have a lot of green screen. You are actually on a live set. If anything, what you’re doing is imagining these alien creatures running around. It’s these guys in suits. But, the set takes away from it all. The fact that you have these cars turned over, blown to bits, and a tank next to you, you’re in the catastrophe of every day, really helped in creating the environment that you would need to make it a reality. I didn’t have to do a lot of imagining. I felt like I was playing Spec Ops the whole time [laughs]!

SheKnows: Aaron Eckhart told us he broke his arm, someone lost a tooth, did you get hurt at all on the shoot? 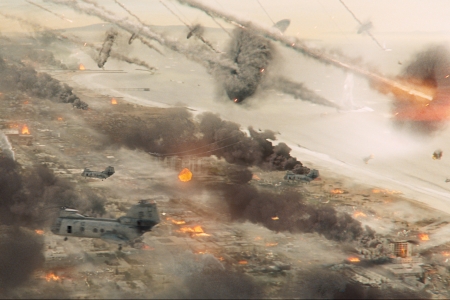 Michelle Rodriguez: We all got beat up. I told you, man, dudes were like throwing up from the intensity.

Michelle Rodriguez: Heck no! We were dehydrating the whole time, I’ll tell you that much.

SheKnows: Did you do your own stunts in Battle: Los Angeles?

Michelle Rodriguez: There are a few scenes where a body double-stunt person was used for me. Actually, there was just one, where my character does a mid-air flip, but other than that, it was me! I wish I could do back flips [laughs]. That would be so cool.

SheKnows: With your body of work, audiences know, you will never be that girl in distress.

SheKnows: When you look at a role, do you choose things that are close to who you are and what you’re about?

Michelle Rodriguez: You know what? It’s kind of a fluke. The fluke is I don’t like embodying the weak broad. It’s something that I’ve always shunned as a child. Growing up, all my heroes were dudes. You know why? Because they do stuff, they don’t sit around whining about it [laughs]. There’s something to be said about that. When I read a script and there’s a woman in there complaining, it just really turns me off. The Cleopatra aspect of a woman is so exploited. You don’t see me trying to be that. There are too many actresses that are pros at it [laughs]. I don’t need to do the sexy thing either, there’s girls all over this town who can rip that a new one. I just stick to what I like. I try to stay true to it and I think my audience appreciates that fact. If I’m good at it, I’ll stick to it.

SheKnows: You’ve shot quite a few guns in your career onscreen, and you look sickly proficient at it in Battle: Los Angeles. Are you personally a good shot? 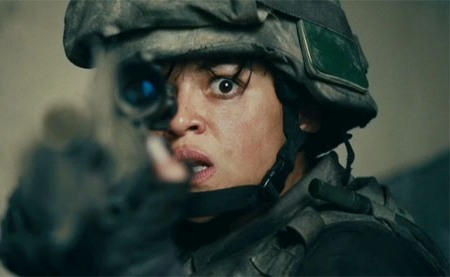 Michelle Rodriguez: [Laughs] I’m really amazing at handling weapons. But, when it comes to shooting them, I have to admit, I’m a horrible shot. I am the most horrible shot. I will draw the gun the fastest. I can take apart and put together the weapon. I’m really good at working it and maneuvering it, but the shooting, not so much [laughs]. My goal is to fix that this year. I’ve been going to the shooting range a lot!

Michelle Rodriguez: I am coming! This year is about being a great shot. I can unload an entire clip at something, and 99-percent of the shots will miss [laughs].