No extortion charges will be filed against former Mel Gibson girlfriend Oksana Grigorieva. 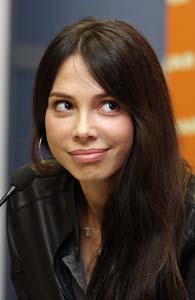 Oksana Grigorieva was accused of trying to extort millions of dollars from Mel Gibson in exchange for keeping the tapes of his racist, sexist and often violent rants from the public — but the Los Angeles County district attorney’s office has rejected the investigation.

While Mel Gibson is expected to plead out to a battery charge on Friday, a source within the DA’s office told RadarOnline, “The DA’s office will announce that the extortion case was rejected. There wasn’t enough evidence to prove that a crime occurred.”

“Oksana could speak at Mel’s hearing on Friday afternoon. She could make a victim’s impact statement, but at this point, it doesn’t seem likely that she will appear.”

Grigorieva is said to be happy with the plea agreement reached by Mel Gibson, which will allow him to skip any jail time — she simply wants him to get counseling for his anger management issues.