Charlie Sheen’s beloved Sheen’s Korner has taken its final bow but that doesn’t mean his Internet days are behind him. Fans can see the Internet’s most talked about celebrity cooking up “winning recipes” on the website Funny or Die.

Charlie Sheen is knee-deep in intern applications, but still made time to film a skit dedicated to cooking for the popular website Funny or Die. According to Charlie Sheen, he “doesn’t cook food, he wills it.” 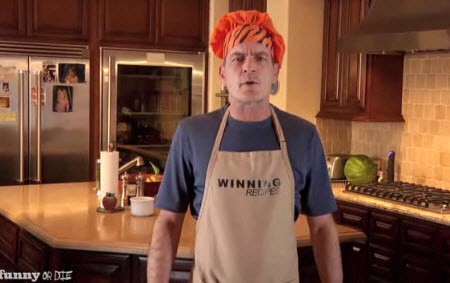 Before people start thinking Charlie Sheen is actually becoming a chef, remember it’s just a skit that was filmed from his home. “Yes, I’m doing a cooking show, why? Because if you haven’t noticed, I’m winning TV,” Sheen explained in his opening of Winning Recipes. “My plan is to be the first person to have made an appearance on every television network. Here I come Food Network.”

Charlie Sheen isn’t your typical cooking host while whipping up winning recipes in his tiger-inspired chef’s hat and apron that reads “winning recipes.” He even teleported from his inside kitchen to his outside kitchen so he could be in touch with his “Adonis ancestors,” while tiger sound effects roared in the background.

Sheen’s cooking utensils were not your average everyday kitchen finds either. His bowls were turned into cauldrons, his spatulas into warlock wands and his tea was made out of ground up dinosaur fossils. Sounds totally yummy!

Chef Sheen claimed to be “living the life of a rock star Vatican assassin,” while he served up what he called a “tomato winning salad.”

He ended the Funny or Die segment by plating up raw meat with cigarettes stuck in it. Charlie Sheen saved the winning ingredient for the end — Charlie Sheen. He zapped the food with his mind, willing it to be the best five-star meal around.

Check out Charlie Sheen’s skit, Winning Recipes, on Funny or Die and tell us what you think.