Blake Lively is Chanel’s newest face and a shot of her first ad has landed. After a photo shoot with Karl Lagerfeld and a week of party-hopping to promote her upcoming Mademoiselle handbag campaign, Lively is now posed in infinity in front of a mirrored wall with a hot, red bag, and there’s more to come.

Blake Lively struck several poses for Chanel designer Karl Lagerfeld for her upcoming Mademoiselle handbag ad campaign. The series of shots is set to hit magazines in April, but the first image has already landed and SheKnows has it here. 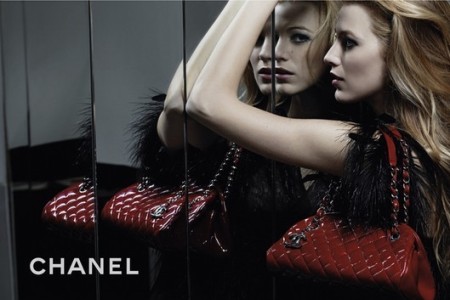 When Chanel signed Lively as the face of their Mademoiselle handbag line back in January, Lagerfeld called her “kind of an American dream girl.”

It’s become clear that the 23-year-old Gossip Girl star is just as enamored with her photog and the Chanel name. “I had other opportunities and I would say, ‘Thank you so much, but I am holding out for Chanel,'” she told The New York Times. “That’s who I want to be the face of. And people would say, ‘Well, that’s unrealistic, they only hire Europeans,’ and I said, ‘Well, how great. I’ll be the first then.'”

Lively was over the moon when the big shoot finally took place in Chanel’s Parisian headquarters. She was so excited to be striking poses for Lagerfeld, in fact, that she shot her own photo of him behind the camera, according to WWD. 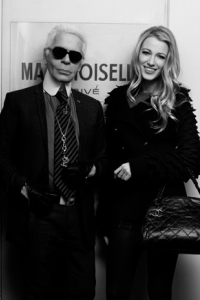 “I have such a respect for fashion and such an appreciation for it that if there are people like Karl Lagerfeld out there designing, who am I?” she asked. “I want to bow down to them and be a representative for them if they’ll have me.”
Lively, who was also snapped in Paris leaving the Chanel store for lunch at Bistro Volnay on March 7, 2011, originally broke into the spotlight thanks to her role as Gossip Girl fashionista Serena van der Woodsen. With more shots to come from the Chanel campaign, Lively is set to hit theaters this summer in Ryan Reynolds’ Green Lantern. In the meantime, after her success in The Town, she is preparing to take on addiction again in Hick, in which she’ll play mommy to Chloe Moretz.

So, what do you think of Blake Lively’s first Mademoiselle handbag ad?