You think you know the story of Little Red Riding Hood? Well, you don’t know everything. In the new film starring Amanda Seyfried and Gary Oldman, that classic tale gets a brand new telling. In Red Riding Hood, Red (or in this case, Valerie) is a young woman instead of a child. She’s in love with a boy named Peter (ahem…Peter and the Wolf anyone?), played by Shiloh Fernandez, but about to be married to the wealthy Henry (Max Irons). This headstrong girl isn’t too happy about this. 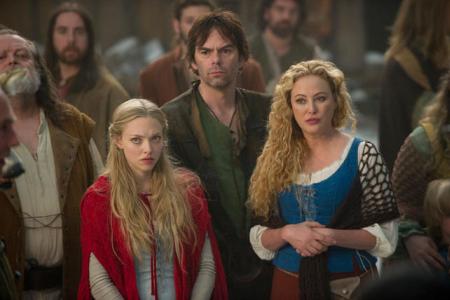 So where does the wolf come in? Well, he’s been terrorizing this remote mountain town for generations. To keep the peace, the townspeople leave offerings of food for him on the nights of the full moon. This time, however, the wolf demonstrates a taste for human prey. Valerie’s sister is killed and an expert has to be called. Enter Father Solomon (Gary Oldman). He has a few, harsher techniques for wolf killing. The twist? It’s a blood moon. During this time, you don’t just die from a wolf bite. You turn into one.

The film also stars the legendary Julie Christie as Valerie’s grandmother. (That woman must have made a deal with the devil to look as good as she does.) It’s directed by Catherine Hardwicke who helmed the first Twilight film. Check out the trailer below and let us know what you think about the trend towards updating fairy tales.