Superbad actor Jonah Hill can no longer be typecast as the fat and funny guy, as he has slimmed down and shaped up. Can a skinny Jonah Hill still be funny? Some are saying no! What do you think? 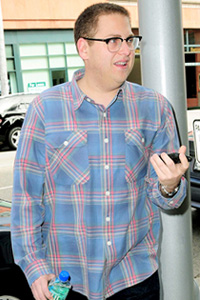 Actor Jonah Hill rose to fame in movies like Superbad, Get Him to the Greek and Forgetting Sarah Marshall as the chubby, funny guy. It looks like the 27-year-old is shedding some of that image, along with his weight.

Hill reportedly wanted to get in shape before his high-action movie 21 Jump Street, based on the hit ’80s TV show starring Johnny Depp. A friend of Hill’s said he “went on a diet for the movie, but gained weight at first!”

The 5-foot-7 actor reportedly lost 30 pounds! “Finally, he got a nutritionist and a trainer. Now he looks better and feels better!” the source tells Us Magazine.

Citing celebs like Drew Carey, John Goodman and Seth Rogen, E! Online says some think that his weight loss will make him less funny. “If he gets too slim, he’ll stop being the ‘fat, funny’ guy and he’ll need to do something else to set himself apart from the rest,” says a comic insider.

“Pretty interesting that even the popular schlubby guys are feeling the heat to look better and hotter.”

Tell us: Do you think a skinny Jonah Hill will be as funny as a fat Jonah Hill?