Real Housewives of Washington D.C. newsmaker Michaele Salahi has been kicked off Celebrity Rehab 5, but not for acting up. Apparently the infamous, alleged White House party crasher is just not an addict, so VH1 gave her the boot. This comes on the heels of news that Sean Young is joining Drew Pinsky’s program. 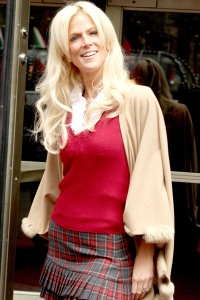 “The treatment program that Celebrity Rehab documents is intended for individuals with serious substance abuse and addiction issues,” VH1 said in a statement. “Prior to the taping of the current season, producers were advised that Michaele Salahi met the criteria to be treated in this setting. However, professional assessments spanning from that time to the present, found that she did not meet such criteria. As a result, she is no longer participating in the program.”

In other words, The Real Housewives of Washington D.C. alum doesn’t have an addiction. Media mongering may seem to fit the bill, but not on Celebrity Rehab, which helps has-been stars battle their drug, alcohol and sex addictions.

With Michaele and Michael Lohan off shooting Celebrity Rehab 5, Tareq Salahi has been staying at Lindsay Lohan’s dad’s house, according to TMZ. His response to all this is that his wife is suffering from multiple sclerosis, but that doesn’t seem to have anything to do with the topic at hand. It’s not an addiction, but a disease.

Salahi isn’t denying she’s not an addict, but indicates there’s more to the story. “That is the excuse they used. But they knew what it was when they cast her,” her manager Gina Rodriguez told CNN.

Perhaps they were making room for their newest member. The Salahi ousting came late Tuesday, March 8, just a day after EW broke the news that Sean Young has joined Celebrity Rehab 5. SheKnows wonders if The Young and the Restless and Skating with the Stars celeb has moved into Salahi’s room at Drew Pinsky’s dysfunctional inn.

Whatever the reason, Sean Young is in, Michaele Salahi is out and word is the Celebrity Rehab process continues for Bai Ling, Michael Lohan, Jeremy Jackson, Amy Fisher and Steven Adler.