No stranger to great animated films, Joan Cusack stars in Mars Needs Moms with Mindy Sterling and both hysterical ladies recently sat down for a video interview on why Mars Needs Moms, and Earth does too!

Joan Cusack, like her brother and frequent co-star and collaborator John Cusack, grew up in Chicago and made her mark on film at an early age. Cusack made her debut at the age of 15 in My Bodyguard and after that scored roles in Sixteen Candles and Say Anything before landing an Oscar nomination for her performance in Working Girl. 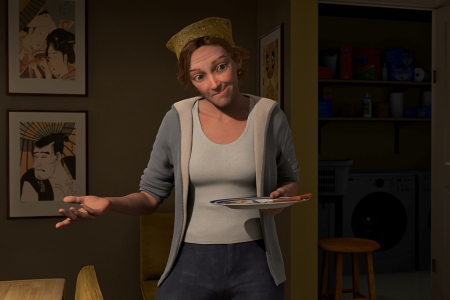 Since then, she is no stranger to roles opposite some of Hollywood’s biggest stars, sharing screen time with Cameron Diaz in My Sister’s Keeper, Jennifer Aniston in Friends with Money and Julia Roberts in Runaway Bride and tackling the vocal booth in the Toy Story series.

Meanwhile, her costar in our video interview and onscreen in Mars Needs Moms is Mindy Sterling, a veteran of comedy mayhem for decades. Audiences will instantly recall her from her role as Dr. Evil’s right-hand woman in the Austin Powers movies. She is not only a graduate of the esteemed Groundlings comedy program in Los Angeles, but she also currently teaches there!

In Mars Needs Moms, both real-life mothers felt it was an easy choice to make a movie that subtly while entertaining, teaches kids that moms are pretty important and life would be absolutely deathly without them. Well, no need to go that far! But, in Mars Needs Moms, Cusack’s mom character is abducted by Martians as her son who just told her off trails behind trying to free her. Unable to catch up, he winds up getting caught in the landing gear and pulled into the ship as it takes off. Adventure, hilarity and a celebration of all things mom ensue.