Kate Winslet showed off her dramatic new haircut on the cover of British Vogue. What do you think of her pixie cut? 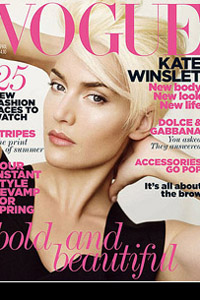 Actress Kate Winslet debuted her haircut on the cover of British Vogue. Instead of her long, layered, honey-colored locks, the 35-year-old actress looks great in a platinum blonde pixie cut. The hairstyle really sets off her eyes and looks great with her features.

Winslet opened up about her past relationships, including her divorce from director Sam Mendes, with whom she has a son. She recently broke up with male model Louis Dowler, and seems ready for a fresh start with her new hairdo.

“Experiencing those moments of being alone…is a very, very weird flooring and exposing position to be in when you’re just not used to it…But I’ve never been lonely. And with my kids Mia (her daughter with first husband Jim Threapleton) and Joe that remains the case,” she tells the magazine.

Winslet, who has starred in hit movies such as Titanic and Revolutionary Road, says she feels happy at this point in her life.

“I actually keep saying it out loud. Last night I went out for a drink with two friends and, as we were walking, I said, ‘God, you know, I feel so good.’ Not in a, ‘Wow! I feel so good!’ way, but just in that quiet centered way. I’m almost surprised by it. I feel well, I feel healthy. I feel clear. I feel centered.”

Winslet is starring in the HBO mini-series Mildred Pierce which premieres March 27 and she is currently filming the movie Contagion.

Read on for more Kate Winslet