Pete Wentz is firing back at Ashlee Simpson after she tried to gain full custody of their son. 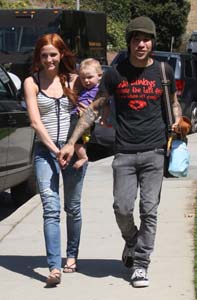 The Ashlee Simpson–Pete Wentz breakup seemed to be going so smoothly. That is, until Simpson started messing around with their custody agreement — and his money.

In the divorce papers filed by Simpson, the pop has-been asked for sole physical custody of their two-year-old son Bronx, allowing only visitation to Wentz. She also wanted him to front all her legal fees.

Wentz thinks this is a load of bull. He wants joint legal and physical custody of Bronx, and for each of them to pay their own legal fees.

Considering the fact that by all accounts Wentz didn’t want this split in the first place, Simpson had some nerve asking him to pay for it.

The papers cite the usual boring old irreconcilable differences as the reason behind the split — but where Ashlee doesn’t cite a date of separation, Pete lists it as February 9, just days after he returned from his Super Bowl celebrations.

Why is that date so important? It comes down to money. Anything either of them makes after that date of separation would not be included as a marital asset. Simpson doesn’t have much cash coming in, but Pete has his hands in all sorts of musical pots.