Charlie Sheen’s Two and a Half Men costar Jon Cryer has managed to stay out of the Sheen craziness — until now. 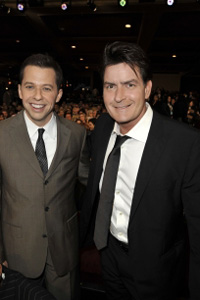 Freshly fired from his hit show Two and a Half Men, Charlie Sheen is taking out some of his anger on his costar Jon Cryer.

Sheen said that many of the cast and crew had reached out to him, but not Cryer, who played his on-set brother on the show since 2003. “Jon has not called me. He’s a turncoat, a traitor, a troll. Clearly he’s a troll. He issued a statement. Is it gonna take me calling him a ‘traitor, juvenile and scared’ for him to get it?”

Two and a Half Men cast and crew who had reached out to Sheen and were, according to him, “not trolls,” include Angus T. Jones (Jake), Conchata Ferrell (Berta the housekeeper), Melanie Lynskey (Rose), Marin Hinkle (Judith Harper) and director Jamie Widdoes.

Cryer insiders are saying that he did reach out to Sheen, but is remaining quiet on the topic out of respect.

Still, Sheen insists that if Cryer tried to contact him now it would be too late.

“What’s there to say? I’ll tell him, ‘You’re a little late. Goodbye, troll.’ When I’m starring in multimillion-dollar films and he’s begging me for a supporting role, I’ll say, ‘You left me out in the cold with all of your guilt and stupidity.'”

Cryer last spoke publicly about Sheen in January when he appeared on Conan O’Brien. “It’s always a little weird, because the stuff you hear is just unbelievable,” Cryer said. “I’m checking TMZ, just like I do every day, to know if I have to go to work at all.”