Brace yourself if you’re a Tom Brady fan. The hunky quarterback was spotted sporting a ponytail in Brazil. Say it isn’t so! 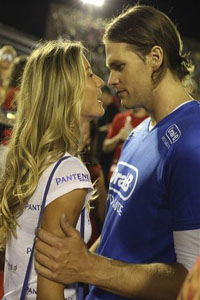 Oh, no! This is a disaster. No, we’re not talking about another Charlie Sheen rant — it’s all about Tom Brady’s ponytail. Yes, ponytail.

New England Patriots quarterback Brady was spotted in Rio de Janeiro with his wife, Gisele Bundchen, and a tiny, greasy-looking ponytail at the nape of his neck. Yes, Mr. Metrosexual himself was spotted with a less-than-perfect coif.

We probably should have seen this coming — Brady sported a shaggy ‘do for much of the football season. Fellow players and journalists even dubbed him Tom Bieber, thanks to his Justin Bieber-esque look.

Something tells us that Bundchen had something to do with Brady’s style evolution — she seemed to enjoy looking at him while extravagant Carnival activities played out around them.

Is the long look just around until football season rolls around? We sure hope so — we’ll take the short ‘do and dimples over long hair any day.

What do you think of Tom Brady’s ponytail?

Read on for more Tom Brady