Lindsay Lohan is planning to sue the jewelry store that released the surveillance tape of her alleged theft, saying she never gave them the right to use her image for profit.

Lindsay Lohan is considering suing the jewelry store Kamofie & Co for selling the security tape that allegedly showed her stealing a necklace. Lohan claims she never gave them the right to use her image for profit, reports TMZ. 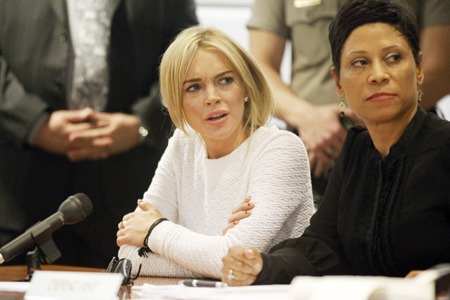 The store reportedly sold the surveillance tape to the Associated Press, who turned around and licensed it to Entertainment Tonight. There are reports that ET paid $25,000 to show clips of the video this week. The video shows Lohan and a friend looking at the infamous $2,500 necklace — and she reportedly believes the surveillance tape will clear her name if the case goes to trial.

Sources close to Lohan say that she also believes this proves that the jewelry store is only out to make a quick buck off of her — and some experts say this could help her case. Some also say that the release of the tape could hurt her chance for a fair trial.

A rep for the jewelry store released the following statement to TMZ:

“We regret to hear there is trepidation by Miss Lohan in connection with the video. We hope that everyone understands that this is beyond our control, the flood of the requests to see this video were simply too overwhelming. It was truly necessary to put it out.”