Have you missed Lara Croft? Well, fear not, fellow video game fans! She’ll be back on the big screen…minus Angelina Jolie. 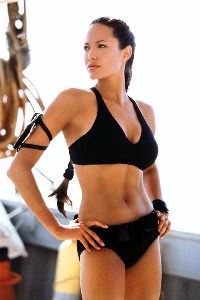 No one can deny that Angelina Jolie looked fabulous in Lara Croft’s short shorts, but her career may have moved past the point of swinging from cables and shooting guns. Fans of the game still have hope for the future though.

There is another Tomb Raider film in the works.

K Films and producer Graham King (who produced both The Departed and The Town) have acquired the rights to the Tomb Raider franchise and plan a reboot, according to Entertainment Weekly.

The film is being given a 2013 release window. The character was created in 1996 by London-based game developer Eidos, and has since been purchased by game publisher Square Enix.

The net is buzzing with rumors about Olivia Wilde, though she might need a bit of, ahem, enhancement to play the famously buxom video game vixen. Well, so did Angie. So would any human female. What do you think? Do we need another Tomb Raider?