Prince William and Kate Middleton might be getting ready for the world’s most anticipated wedding but that didn’t stop them from making a surprise visit to Northern Ireland. 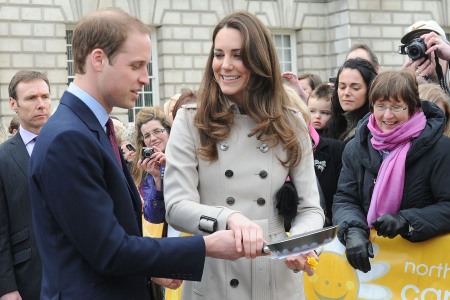 The royal couple made a stop in Northern Ireland and did what any other Prince and his fiance would do — flipped some pancakes.

While in Northern Ireland as part of a two-week national tour, Prince William and Kate Middleton headed to Belfast’s City Hall and Greenmount Agricultural College to take part in Pancake Day. No, it’s not a joke. They actually celebrated Pancake Day by flipping the yummy breakfast food with children from the charity, Northern Ireland Cancer Fund for Children.

The couple also helped put up a fence at Greenmount Agricultural College.

Prince William and Kate Middleton recently made stops at St. Andrew’s University in Scotland and Anglesey in North Wales. Their latest stop in Northern Ireland is only a one-day visit and was reportedly kept quiet for security reasons.

Next up for the royal couple is their April 29 wedding at Westminster Abbey. The world is waiting on the official confirmation as to who Kate Middleton will be wearing when she walks down the aisle. Reports have recently said it will be Alexander McQueen, but we’re still awaiting confirmation.