Charlie Sheen rolled out his latest episode of Sheen’s Korner on Monday night where he discussed everything from trash to poetry.

Charlie Sheen debuted the third episode of Sheen’s Korner on? ?Monday night and no subject was off limits. Here’s what you missed if you were unfo?rtunate enough to have not witnessed Sheen’s recent Internet ramblings: Trolls built phones, he’s seeking interns and don’t empty your trash cans. Oh, h?e also wanted viewers to know that there were actually 6,000 hours in a day. Good to know, right? 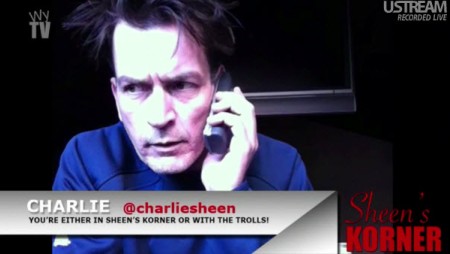 If you are lucky enough to snag an interview with Sheen, the key to becoming his intern is simple — kiss his butt. Not our words, they are his.

Charlie Sheen also talked about his venture into poetry. “I’m going to roll out an infomercial for my poetry book,” he told viewers. He’s also looking into Amazon.com as a stepping stone to selling his book, Apocalypse Me: The Jaws of Life.

Sheen also referenced “Bob” again while giving a shout-out to the masses for doing the right thing. “The people are doing exactly what they should be doing, which is watching me and listening to you. Because we have all the answers. We have all the gold. We have all the solutions, Bob. And keep in mind anytime I roll something out, my plan is the best plan in the room. And people are starting to realize that, that their plan is (expletive) and my plan is gold. Walk into ?my plan and they’re going to win, win, win.”

The webcast was reportedly filmed Monday morning before the news of Charlie Sheen’s firing from Two and a Half Men had gone public so we can surely expect more rambling in regards to the firing on his next streaming rant.