Charlie Sheen has been officially fired from Two and a Half Men — and we have the termination letter! 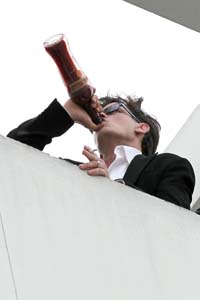 Warner Bros. pulled no punches in the official termination letter sent to Charlie Sheen letting him know his services would no longer be needed as part of the cast of Two and a Half Men.

The 11-page letter, sent to Sheen’s lawyer Marty Singer, points out exactly how Charlie has dug his own grave, but has a few distinct areas of hypocrisy.

“There is ample evidence supporting Warner Bros. reasonable good faith opinion that Mr. Sheen has committed felony offenses involving moral turpitude (including but not limited to furnishing of cocaine to others as part of the self-destructive lifestyle he has described publicly) that have ‘interfere[d] with his ability to fully and completely render all material services required’ under the agreement,” the letter states.

“Mr. Sheen’s erratic behavior escalated while his condition deteriorated,” the network wrote, stating that Sheen’s obvious cocaine addiction and absurd outbursts caused them to make “an airplane available to take him to a rehabilitation clinic before he reneged on his commitment to enter such a facility.”

“Mr. Sheen’s physical appearance, inability to deliver lines, inability to collaborate creatively with staff and crew, inability to work with the executive producers, inflammatory comments poisoning key working relationships, and frustration of the Show’s creative environment by the public spectacle of his self-inflicted disintegration.”

In short? Charlie Sheen breached his contract by not holding up his end of the bargain.

So where’s the hypocrisy? When Sheen was arrested last year on domestic battery charges in Aspen, not only did Warner Bros. not enact the moral turpitude clause of his contract and fire him, they renegotiated his contract.

Singer says Sheen plans to sue show creator Chuck Lorre and Warner Bros. and demands the actor be paid for the remaining eight episodes of the season. To drive his point home, Sheen stood atop the Live Nation building in LA waving a sword and drinking (hopefully fake) tiger blood while yelling, “Free at last.”

48 mins ago
by Alyssa K. Davis