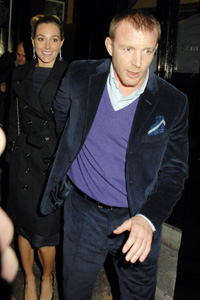 The new baby will join Ritchie’s other two children — 10-year-old Rocco and five-year-old David (with ex-wife Madonna). The 42-year-old British filmmaker divorced Madonna in 2008 after being married for eight years.

Ritchie has been dating Ainsley since March 2010 and she has moved into his house in Marylebone, London. “I lived on my own for three years and I loved having my own space. But yes, now things have changed and I’ve moved to London. It was very organic, we were spending all our time together so it made sense,” Ainsley told Britain’s Hello! magazine.

Sources are saying that the couple will be making a wedding announcement soon.

“Jacqui was crying with joy when she found out,” a source said. “They went on holiday because Guy is desperate for her to take it easy. He won’t let her do anything more strenuous than argue over baby names.”

Ritchie is staying busy working on the sequel to Sherlock Holmes called A Game of Shadows starring Robert Downey Jr. and Jude Law.