Daniel Craig gets into the spirit of International Women’s Day by dressing as a woman in a two-minute film with Dame Judi Dench. 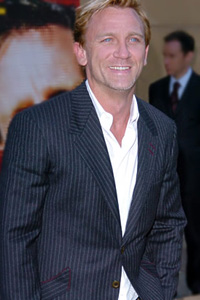 The ultimate lady’s man James Bond (Daniel Craig) brings to light an important issue affecting women around the world, which is the rate of sexual assault of women as well as gender inequality in the work force.

This two-minute video, directed by Sam Taylor-Wood and produced by James Bond producer Barbara Broccoli, was commissioned by a number of charities campaigning for women equality issues and is in support of International Women’s Day.

In the film, Craig walks out and stares at the camera while Judi Dench’s voice (playing her M character from James Bond) is heard talking about women’s equality and referring to how James Bond gets away with many things that a woman would be judged for.

“We’re equals, aren’t we 007?” asks Dench in the voiceover. “Yet it is 2011 and a man is still likely to earn more money than a woman, even one doing the same job. As a man you are less likely to be judged for promiscuous behavior, which is just as well, frankly…There would be virtually no risk to your career if you chose to become a parent…or became one accidentally. For someone with such a fondness for women, I wonder if you have ever considered what it might be like to be one?”

Craig turns and walks off the set, returning in drag wearing a blond wig, make-up, dress and high heels. As he takes off his wig, Dench adds, “Every year 70 million girls are deprived of even a basic education and a staggering 60 million are sexually assaulted on the way to school. So are we equals? Until the answer is yes we must never stop asking.”

Watch the video here and tell us what you think!