Kathy Griffin is being called a bully by Sarah Palin after the comedienne poked fun at the former Alaskan governor and her family. Did Griffin go too far — or does Palin need to toughen up? 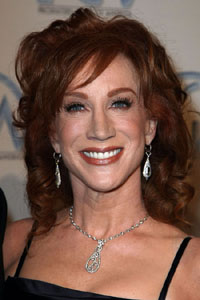 After the news broke that Kathy Griffin would be playing a “Sarah Palin–like Tea Party-candidate mom” on Glee, the comedienne poked fun at Sarah Palin to the press and during her comedy routines. Palin, however, is not letting Griffin’s comments go unnoticed as the two exchange words.

Palin told Fox News she was upset that Griffin was picking on her kids. Griffin called Bristol Palin “the white Precious” during her Dancing With the Stars appearance saying she had gained weight (in reference to the movie Precious). Bristol responded by saying, “She’s had botched liposuction procedures and stuff like that…”

Of course, this is not the first time Griffin has poked fun at the Palin family. Let’s not forget that Griffin had fun with Bristol’s ex, Levi Johnston, in 2009 when she had a pretend romance with him and paraded him around the talk show circuit (Larry King, Anderson Cooper) and said that he was “building a love igloo in Wasilla” for them. Johnston, who is the father of Palin’s first grandchild, seemed to love the attention.

Griffin also talked on-air about 16-year-old Willow’s comments on Facebook (writing “Your so gay” to classmates making fun of Palin) that were seen as homophobic by Griffin.

Palin, who is starring in her reality show Sarah Palin’s Alaska, spoke with Fox News and took a few jabs of her own at Griffin. “You know, Kathy Griffin can do anything to me or say anything about me, because you know, she’s kind of this…she’s a 50-year-old adult bully is really what she is. She’s kind of a has-been comedian and she can do those things to me. I would just ask for respect of my children. Kathy, pick on me, come up to Alaska and pick on me, but leave my kids alone.”

Griffin, who stars in her own reality show called My Life on the D-List, reacted by offering Palin tickets to her new theater production, Kathy Griffin Wants a Tony.

Griffin’s publicist made the following statement. “As a fellow reality star, Kathy would like to extend free tickets to her upcoming Broadway show to reality-star Sarah Palin and her reality-TV crew. Kathy supports all reality stars regardless of what they say about her.”

In the meantime, stay tuned for more back-and-forth as Griffin preps for her upcoming Glee appearance.