Last Comic Standing finalist Mike DeStefano passed away from a massive heart attack. Read on to learn more about his untimely death.

Mike DeStefano, one of the finalists on last season’s Last Comic Standing, passed away Monday of a massive heart attack, according to TMZ. 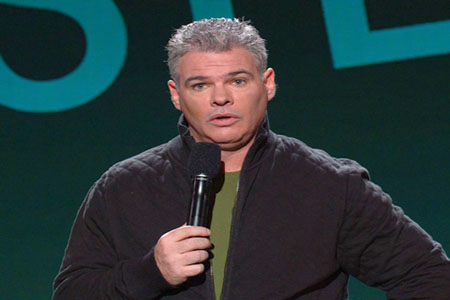 Bronx-born and raised DeStefano battled heroin addiction but beat the habit 11 years ago to become a comic. He celebrated his sobriety by performing in prisons and rehab clinics for free.

“It is with a heavy heart that we announce the passing of a dear friend, a true gentleman, a great comic, and a fierce warrior, Mike DeStefano,” his rep wrote in a statement. “Mike had a lot of wisdom to share with the world from his own life lessons and he always did it with laughter and a smile.”

“It’s hard to think that there won’t be any more ‘hey sweetheart’ calls, because Mike always made my day with his mix of kindness and warmth and profanity filled rants against the wrongs of the world. He was the genuine article. We love you and will miss you, Mike.”

DeStefano’s brand of in-your-face and crude comedy won over the judges on Last Comic Standing. He was on tour when he passed away – and sadly, his website still lists his scheduled dates.

DeStefano’s death isn’t the only tragedy to strike the popular NBC show — judge Greg Giraldo passed away in September 2010 from an accidental overdose.