Britney Spears never fails to deliver. Sometimes that delivery is juicy gossip, but these days, Spears is all about the music. Her newest single, Till the World Ends, has dropped and Britney Spears says the party track is her fave from her upcoming album, Femme Fatale. 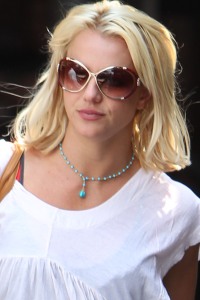 Pop princess Britney Spears is so excited about her upcoming album Femme Fatale that she’s been dropping teasers all over the net. The first official single, Hold It Against Me, is already a major hit and now, we have a second single, Till the World Ends!

Britney’s new album was two years in the making and the pop princess can’t wait for it to finally drop on March 29. “It’s my best work yet,” the 29-year-old told Ryan Seacrest. “I love the album. I actually listened to it on the way over here. It’s definitely something that you want to work out to. It’s definitely upbeat. Will.i.am is on the album and I’m a dancer, so it’s something I can work with. It’s really fun!”

The newest album teasers to hit the net are from her songs (Drop Dead) Beautiful and Criminal, but Spears contends her fave Femme Fatale track is the newest single, Till the World Ends.

The party song tells us to “keep on dancing till the world ends” and with a tour in the works for early summer, Brit revealed she’ll be in shape to do just that! While her man Jason Trawick’s workout kick has turned him into a “ripped” hottie, she’s been working her own regimen.

“I have a trainer,” Spears said. “I’m on the treadmill for 30 minutes and we do a lot of cardio and running — he kicks my butt. You pay to hate your trainer, it’s so odd.”

With Femme Fatale in stores on March 29, SheKnows has the single Till the World Ends for you to check out, as well as the album’s entire track list. Have a listen to Brit’s new single and let us know if it makes you want to dance Till the World Ends.