True Blood shape shifter Sam Trammell and former Mad Men housewife Missy Yager are going to be parents. In fact, the long-time couple has twins on the way! 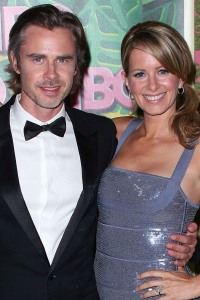 “The couple is thrilled and excited,” the rep for Sam Trammell told People, confirming the baby buzz.

There’s no talk of Trammell and Missy Yager getting hitched, but the pair has been together for eight years. Word is the expectant parents met in the New York theater scene, where Trammell was nominated for a 1998 Best Actor Tony Award.

While Trammell is known and beloved as True Blood shape shifter and bar owner Sam Merlotte, Yager has her own list of TV credits. She played a desperate housewife on Mad Men back in 2008, did time on Boston Public and My Own Worst Enemy, and had guest gigs on Eli Stone, In Plain Sight, Six Feet Under and NCIS.

Trammell will be back to revealing the darker side of Sam Merlotte this summer, when season four of True Blood hits HBO. Sam discovered his own family last season and as fans know, that did not turn out well at all. It went so badly, in fact, that we saw Sam return to his darkest, murderous instincts.

Trammell’s twin news came out after the True Blood event at Paley Fest in Beverly Hills this weekend and has overshadowed another bit of romantic gossip: Word is True Blood season four will bring new tension for Sookie (Anna Paquin) and malevolent, sexy vamp Eric (Alexander Skarsgard). With Eric facing an identity crisis, he may turn to Sookie for support and a whole lot more.

In the meantime, SheKnows sends congrats to the expectant parents, Sam Trammell and Missy Yager. With two on the way, the acting duo better get their sleep in now!